Pioneer’s DDJ-WeGO4 is the latest edition to the affordable, entry-level DJ controller market.

It comes with all the usual frills that will keep beginner DJs happy, but can also be used by more experienced jocks. Available in a range of colours (for the fashion conscious amongst us), it’s a load of fun to use, and the clear, uncluttered layout makes it an appealing option for any DJ.

The controller comes in at an affordable £249, and in keeping with the previous variants of the WeGO family, it’s smaller than many of the other two-deck mixer-style controllers in the market-place. Both of these factors will appeal to DJs who need something ultra-portable and inexpensive. However, as sound quality and usability are always a priority, DJ Mag Tech wanted to see if the WeGO4 was the right bit of kit for the job. 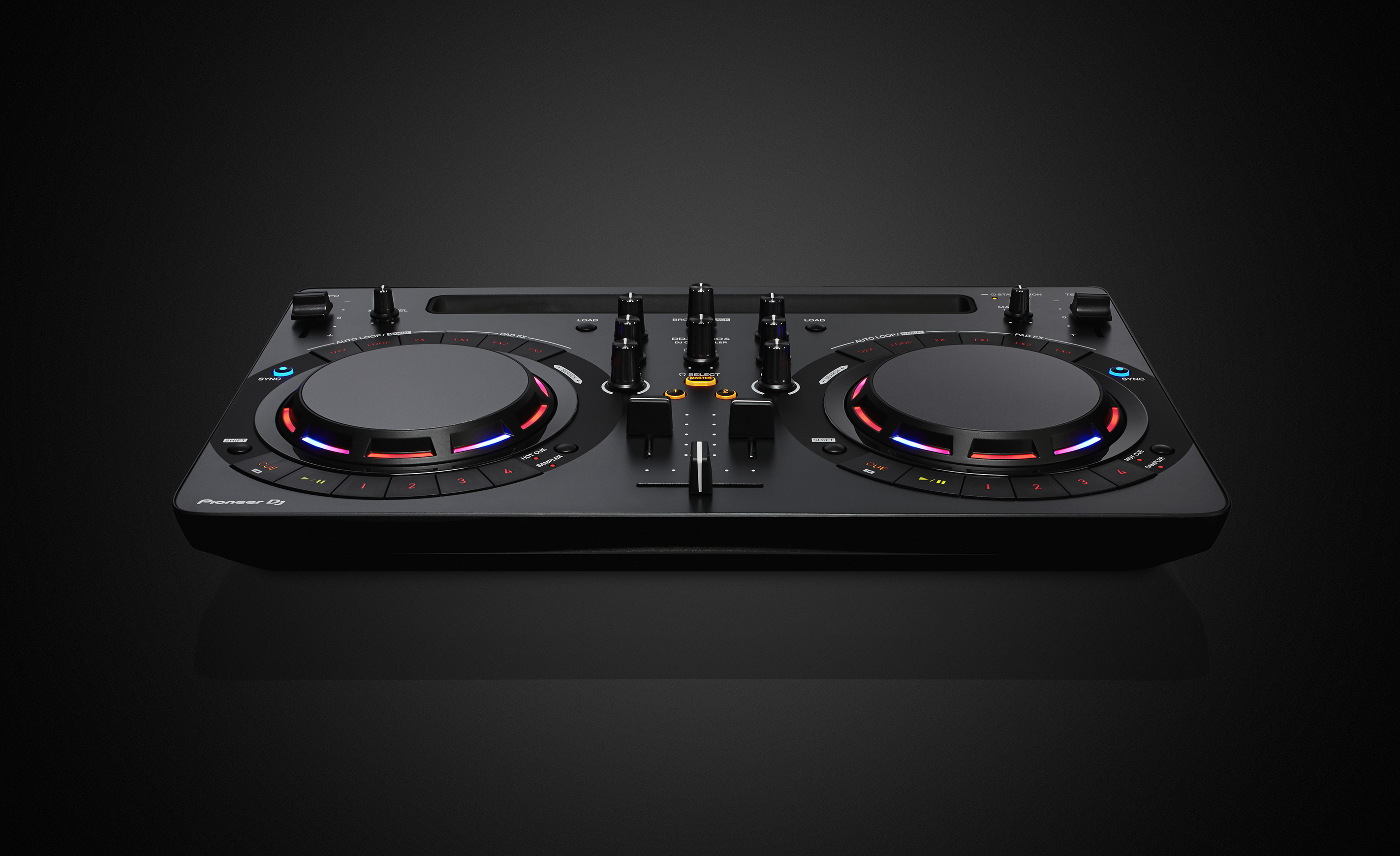 We tested the device with Pioneer’s Rekordbox DJ software, but it can also be used with Pioneer DJ’s new WeDJ app, iPad Algoriddim’s DJay 2, as well as Virtual DJ LE 8 — which is free to download.

Once the software is installed and the controller plugged in you can loading/playing tracks and mixing them. We love the look and feel of the WeGO4 — the cool, understated compact styling of it — but at the same time the practical nature of the controller, with many of the essential buttons used for performing placed around the jog-wheels on the unit. 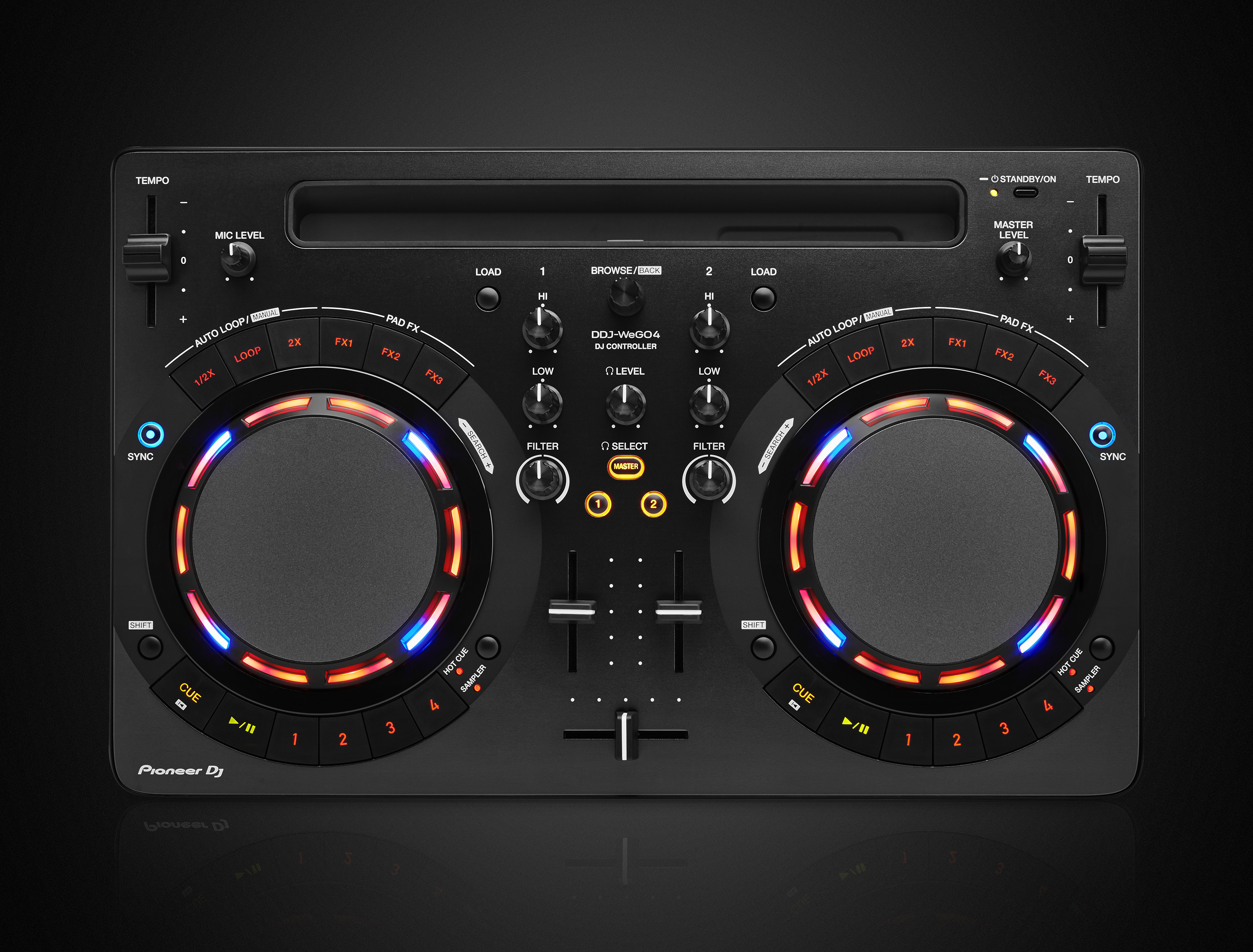 The WeGO4 allows for some real DJ mixing, rather than just playback button-pressing, yet focuses the user on certain functions, rather than throwing up so many options that would initially be intimidating to new DJs.

With four cue buttons, three effects buttons, Pad FX, sampler and loop options on each of the decks, there is plenty of room for creative mixing, and there is much more mix trickery to be done using the filter knobs as well (the filter can also be exchanged for another effect by going into the software settings — Rekordbox DJ). 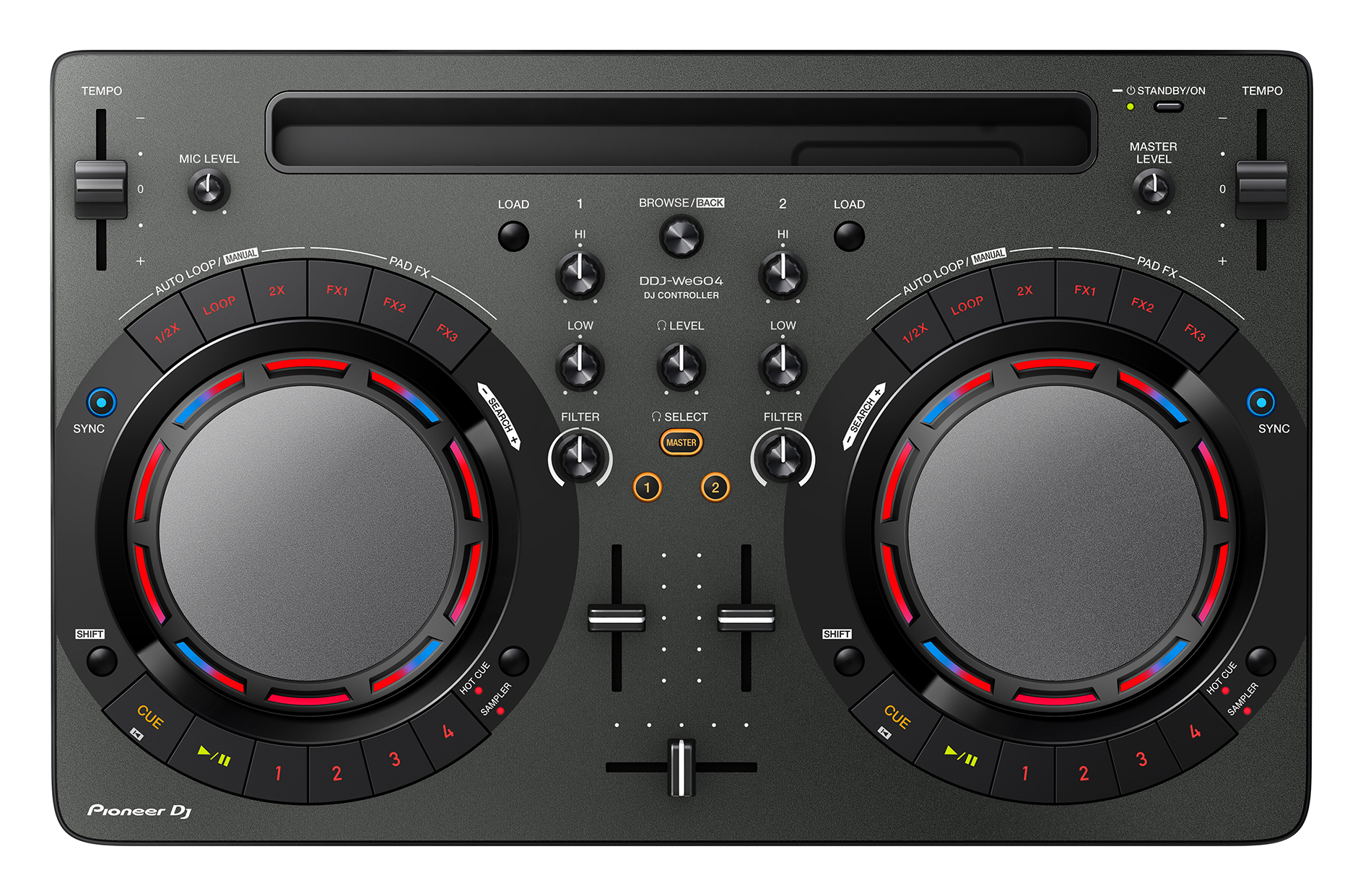 The jog-wheels have a decent firm feel to them, as do the rest of the controller’s knobs and buttons. And there are also LEDs built into the jogs to monitor track progress.

The tempo sliders are easy to control, giving DJs the chance to sack-off auto-sync and get busy in the mix. The controls are easy for beginners to get to grips with, and feel nice to use. And what the controller lacks in weight, it gains in portability, which is a definite priority for many people. 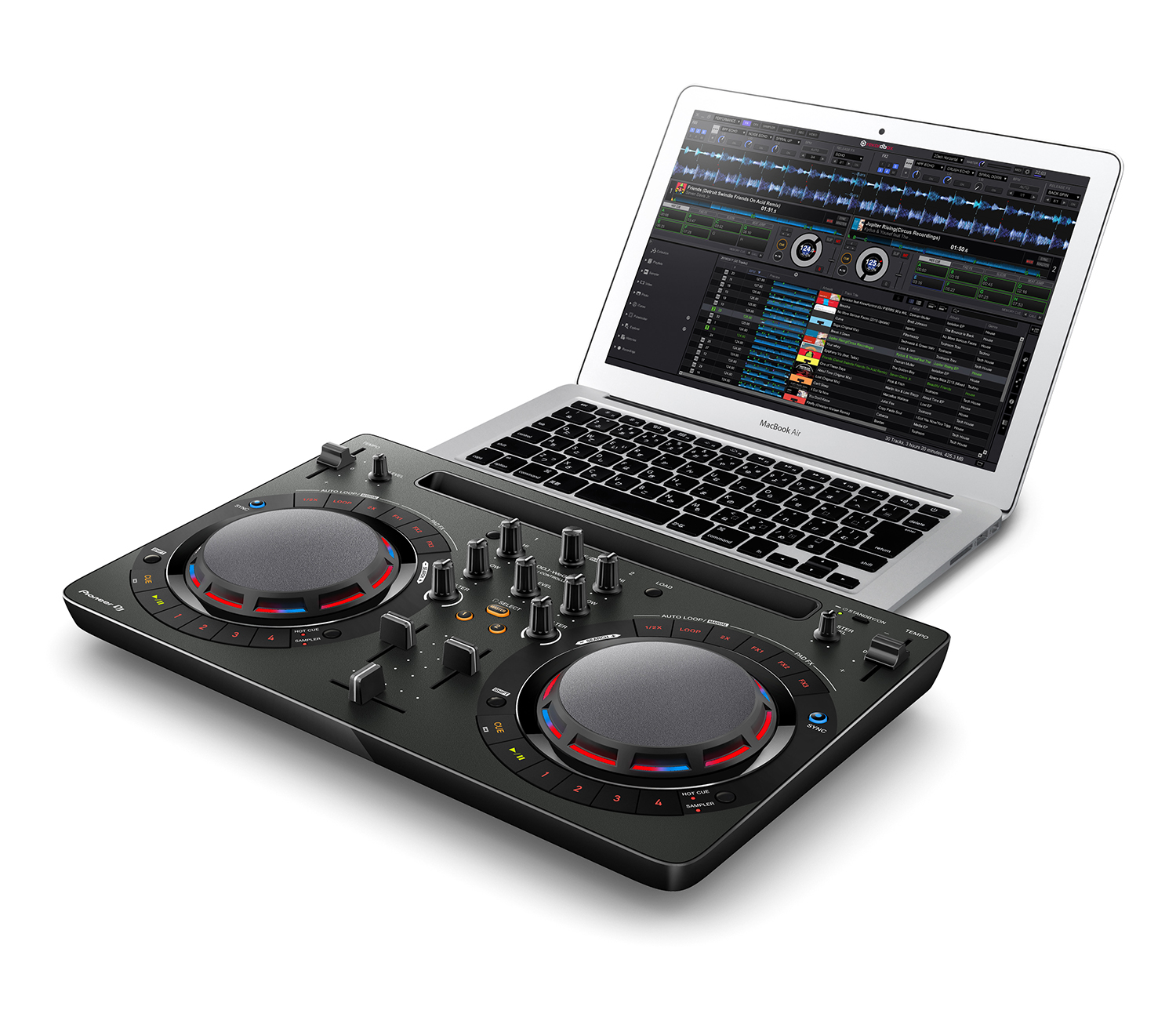 Playing with the loop mode is one of the more fun features of the controller. On the device there are three loop length buttons, set to 1/2, 1 and 2x bars, which is enough to get some good looping going. The four slots available for hot cues and samples are straightforward enough and allow for enough material to be loaded and prepared prior to and during your sets.

The WeGO4 doesn’t have waveform viewing screens built in to the device, but this isn’t a problem if you’re using your iPad or iPhone as this sits nicely on top of the controller in the provided docking bay. This integration of the iPad/iPhone into the kit is great for those that will want to use their iOS device for DJing, and for those using their laptops they can easily refer to the screen of the computer for reference. 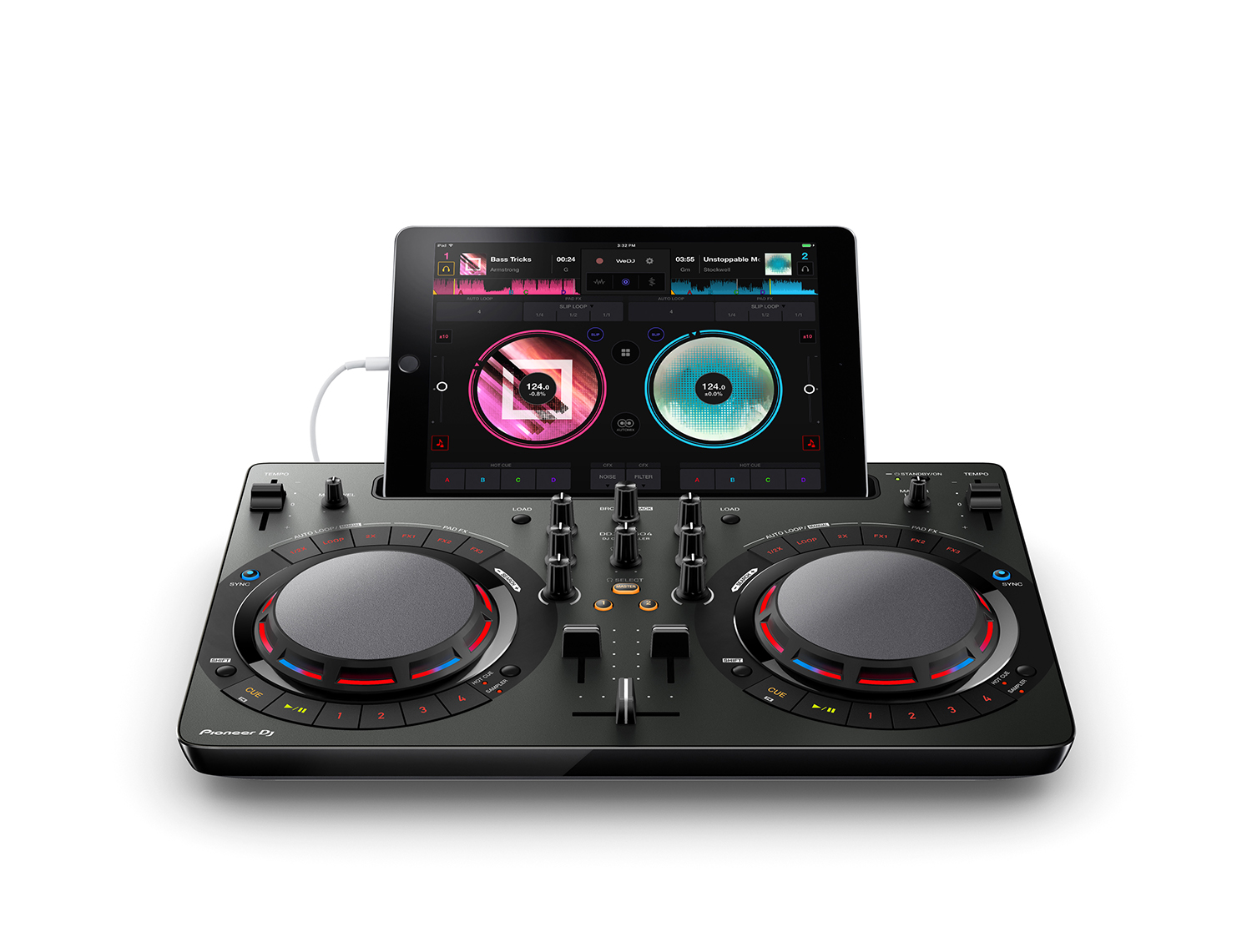 The inclusion of a microphone input at the back of the controller is useful for DJs of a mobile persuasion (or future EDM stars). Alongside this are the RCA Phono output, USB and power connecters, as well as a connection for your iOS device (which also serves as a charger). The two headphone inputs are found at the side of the unit, one for mini jack and the other for a standard jack.

The only real problem with the WeGO4 is that there are no volume level indicators built into it — so no visual references to the volume of your tracks. This said, as long as you’re attentive with the up-faders and keeping an eye on the software, this shouldn’t cause too much of a headache.

The rub is that Pioneer’s WeGO4 controller is good for exploring the art of creative mixing’s intricacies. It has all the tools needed by DJs on offer for looping, sample playback, FX et al — albeit via the software. It is also versatile and can be tailored to your specific DJing needs, depending on your software of choice. This all makes it a great tool for beginner DJs, and could be used for most DJ sets, although it might not challenge real pros enough.

A controller worth having for a DJ at any level, from beginners branching into the world of DJing to seasoned veterans alike, the WeGO4 is fun, and its simplicity makes it a joy to use. 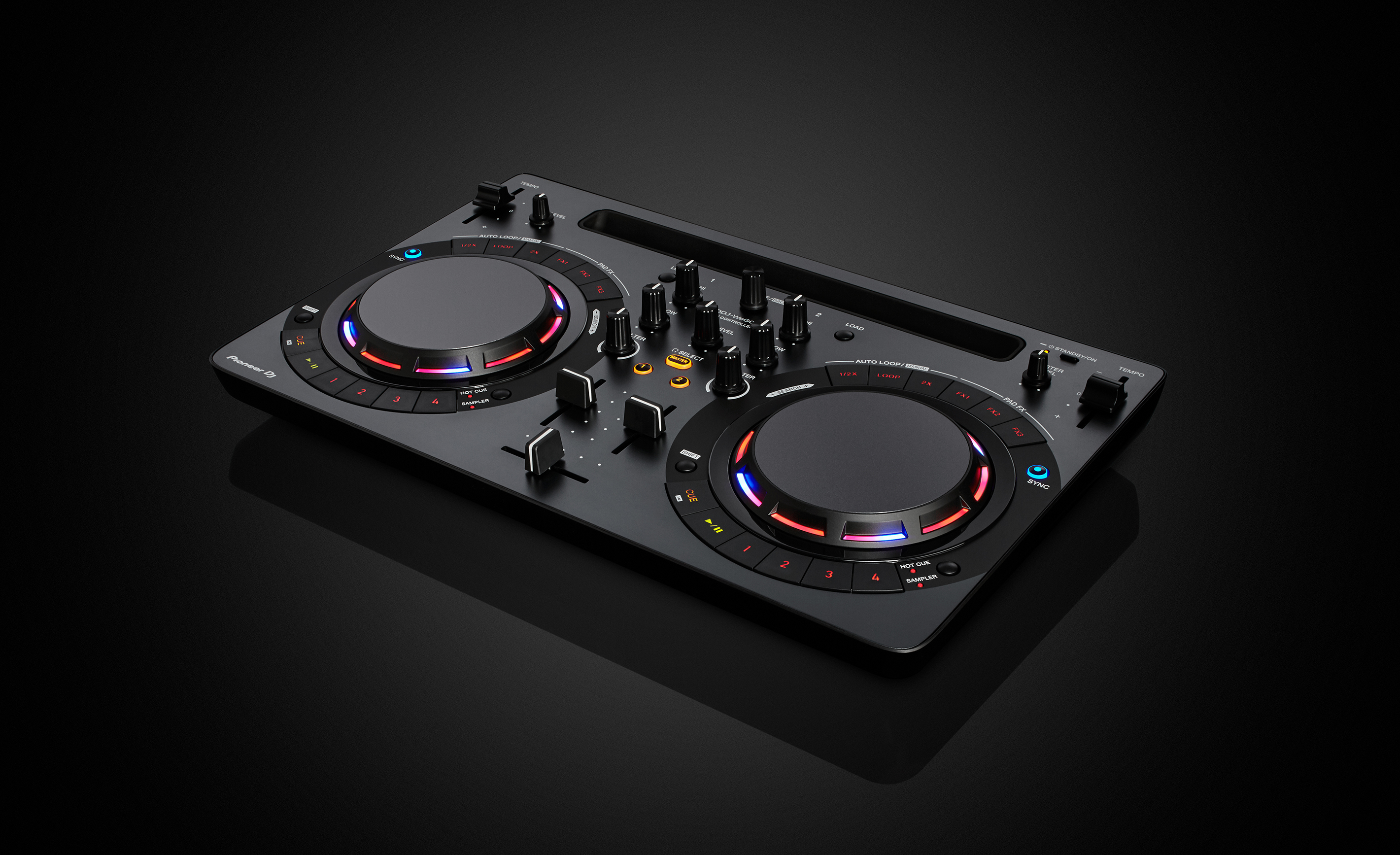 Really portable, looks good and isn’t over-complicated. Great for a well-planned set, and good for newbies wanting an introduction into DJing, as well as for established DJs.

Doesn’t have some features that a larger controller might.

The WeGO4 is Pioneer DJ’s excellent latest release. The simple interface and quality controls make the device a great controller for DJs at any level. It’s portable, elegant and simple to use, adding to the fun factor while in the mix.