It’s a bright and windy day in Copenhagen when we speak to Solid Blake. Soon the temperature will plummet in the city, but she doesn’t mind the colder winter weather. The Danish capital has become an increasingly vital hub for the underground dance scene, with DJs such as Anastasia Kristensen, clubs like Culture Box, and the Fast Forward collective all based there; for Solid Blake, it’s the place where she first felt confident enough to pursue a life in music. When she moved there from Glasgow to do a Masters in Philosophy around Cognition and Communication, she found it a welcoming environment to dedicate herself to DJing and producing.

“I didn’t expect then that I would end up staying,” she says, “but I just loved it so much that by the time the degree was finished, it was like, ‘this is where my home is now, this is where my friends are’. And of course, where I started doing this music thing.”

Creating contrasts and juxtapositions drives Solid Blake’s DJing. She darts quickly between styles rather than settling on a specific genre, and enjoys the disparities and shifts it’s possible to create if you think outside proscribed lines. “My sets aren’t five-hour journeys where you can’t hear where the transitions happen,” she says. “It’s something very deliberate that happens in a blend — different textures of sound or ideas within the track, but in a way that makes sense. Contrast is really important. You can hear that in the music that I make as well.”

After a stint working as a producer for Subcity Radio, Blake made waves with her first EP, 2017’s ‘Mario’ on Outer Zone Records (the label arm of Glasgow’s La Cheetah Club). She has since built a reputation for titanium coated electro, both in her productions and DJ sets — yet listen closer, and other influences can be heard, from techno and brain dance to the left-field fringes of bass. ‘Warp Room’, released on Modeselektor’s Seilscheibenpfeiler label, mixed industrial clank and mechanical drive with sinuous rhythms, while this year’s remix of Tred’s ‘Disconnected’ moved from murky EBM bass and emerald clouds of melancholy synth into a pummelling mid section, possessed of a febrile post-punk energy. Above all, whether she’s DJing or making her own music, Blake is careful to avoid nostalgia.

“I love electro in the classic sense of it, but it’s not really necessarily what I’m trying to make,” Blake says. “I play that stuff in my sets, but when I’m making something, I try not to be retro at all with the sound palettes I use.”

Blake’s focus on the new is something she shares with Stingray, the Detroit DJ who has been partly responsible for the revived popularity of electro in Europe. Stingray remixed ‘Mario’ from Blake’s first EP, and has since played alongside Solid Blake at numerous clubs, while championing her tracks. The way that he’s more concerned with tempo than genre, fluidly moving between electro, footwork and drum & bass, is an influence.

“I’ve spent a lot of time DJing with Stingray,” she says. “He was my favourite DJ 10 years ago. The fact that we work together now - he’s such an inspiration. He isn’t someone who lingers on the past very much. He’s interested in being a futurist in his work, and he works to set the bar that way.”

Another inspiration to Blake is Berlin punk Gudrun Gut, whose pioneering work with industrial band Einstürzende Neubauten, Malaria and other groups, as well as her considerable solo career, has provided a road map of sorts for her own approach to musical creation.

“I was extremely inspired last year during her RBMA lecture,” Blake says. “It was the first day of our course, and it might have been two or three hours long. She’s now in her sixties, just started a new label last year, and is doing things in her own way like a pure punk from the ’80s — making things happen in a way that, when I was younger, I never thought that I would be able to. It took me a while to come out of my shell and start trying things, especially trying things publicly, and that’s something she’s never been afraid of. She’s still going and has been able to retain her integrity. If you do that, you give your work a lot more longevity because it’s not something that comes and goes with fads.”

“It’s a lot of fun to make stuff together. I can be a lot braver as well. Because you’ve got someone else signing off on it before it goes out, it feels a lot less frightening to be more creative”

Along with her solo material, Solid Blake also makes tracks and performs live as part of the duo Historical Repeater with Danish producer Troels Baunbæk-Knudsen. Their 2018 tune ‘Scientific Calculator’ has a thumping four-four kicks, psychedelic riffs, and a disreputable atmosphere; ‘Say Nothing’ from the same EP had a curling viper of a bassline that writhed over minimalist beats. With a more techno aesthetic, the project allows Blake to explore other sounds and work in a different way.

“It’s a lot of fun to make stuff together, trying stuff out and having someone else’s company there,” Blake says. “It’s an interesting clash of our two styles. I can be a lot braver with that as well, because you’ve got someone else signing off on it before it goes out. If it’s something that we both agree on, if you’ve got a team together already standing by you when you put it out there, it feels a lot less frightening to be more creative.”

There are plenty of Historical Repeater tracks still to be released, and Solid Blake thinks that they’ll start performing live again in 2020. This year, much of her production work has been taken up by remixes, with versions of Hungary’s Norwell, Australian Tred, and Sweden’s Pär Grindvik all seeing the light of day; several more are planned for release soon.

“It’s interesting trying to take someone else’s sound, and make it into something that also sounds like you,” she says. “Once I’ve started the project, I try not to listen to the original too much, so that it can develop. Sometimes you come out the other side and it’s nothing like the original, but you can just hear small elements of it, but I love doing that.” 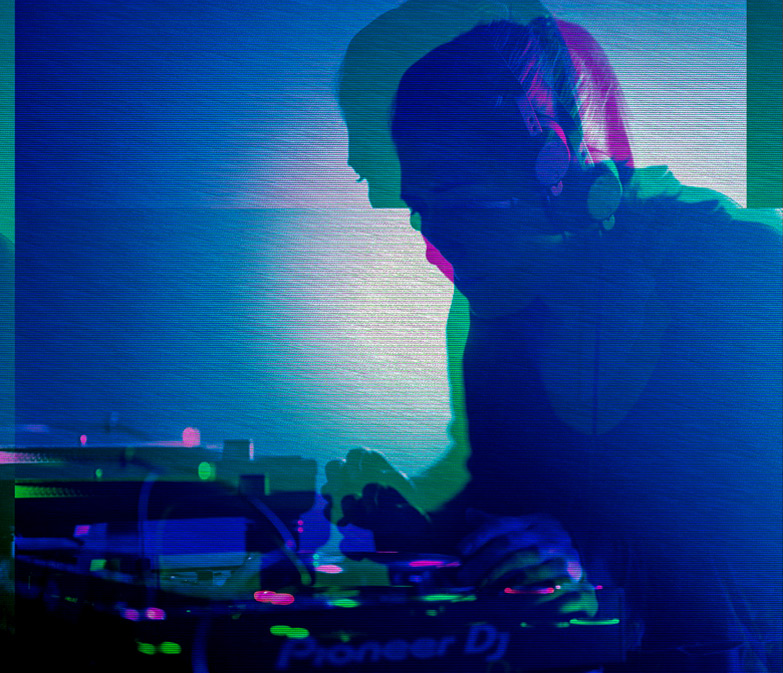 With her productions and DJ sets both in demand, Solid Blake has become an increasingly ubiquitous presence on line-ups across Europe. Before the year is out, she’ll play in Barcelona, Berlin, and Paris. One of her favourite clubs is Amsterdam’s De School, a place she singles out for praise. “Every single element, the way they’ve put that club together, the line-ups, the lights and the sound, the layout of the whole place, the vibe from everyone there as well, it’s so special.”

All these gigs have meant a constant refinement of her mixing style, evident on her blend for DJ Mag’s Recognise series. It offers an earful of uncompromising beats, ranging from DJ Richard’s spooky, EBM influenced ‘Casca’s Theme’ to spiralling acid and breakbeat, via the psychedelic propensities of rising Manchester-based producer 96 Back.

“This mix was really enjoyable to record, with the first section made up of quite simple, groove-based electro before moving into darker, noisier spheres for a few tracks just before the halfway mark,” Blake says. “I’ve really been enjoying 96 Back’s music recently, and find his stuff to be a great way to suddenly lift the atmosphere of a set and take it somewhere else. The second half is more fun, with mad breaks and acid, including the Scratch D & H Bomb belter that came into my consciousness recently at Radiant Love when played by Byron Yeates during a mind-bending set.”

Already, 2020 looks like being a banner year for Solid Blake, with some under-wraps collaborations and new tracks to look forward to. “This year has been really nice, going to shows and meeting people who have been my heroes for years, and then suddenly talking about doing a record together,” she concludes. “I don’t know if I can name any names yet, but there will be more solo material coming.”

Want more electro? Check out our On Cue mix with Sync24, and our Recognise mix with Jensen Interceptor