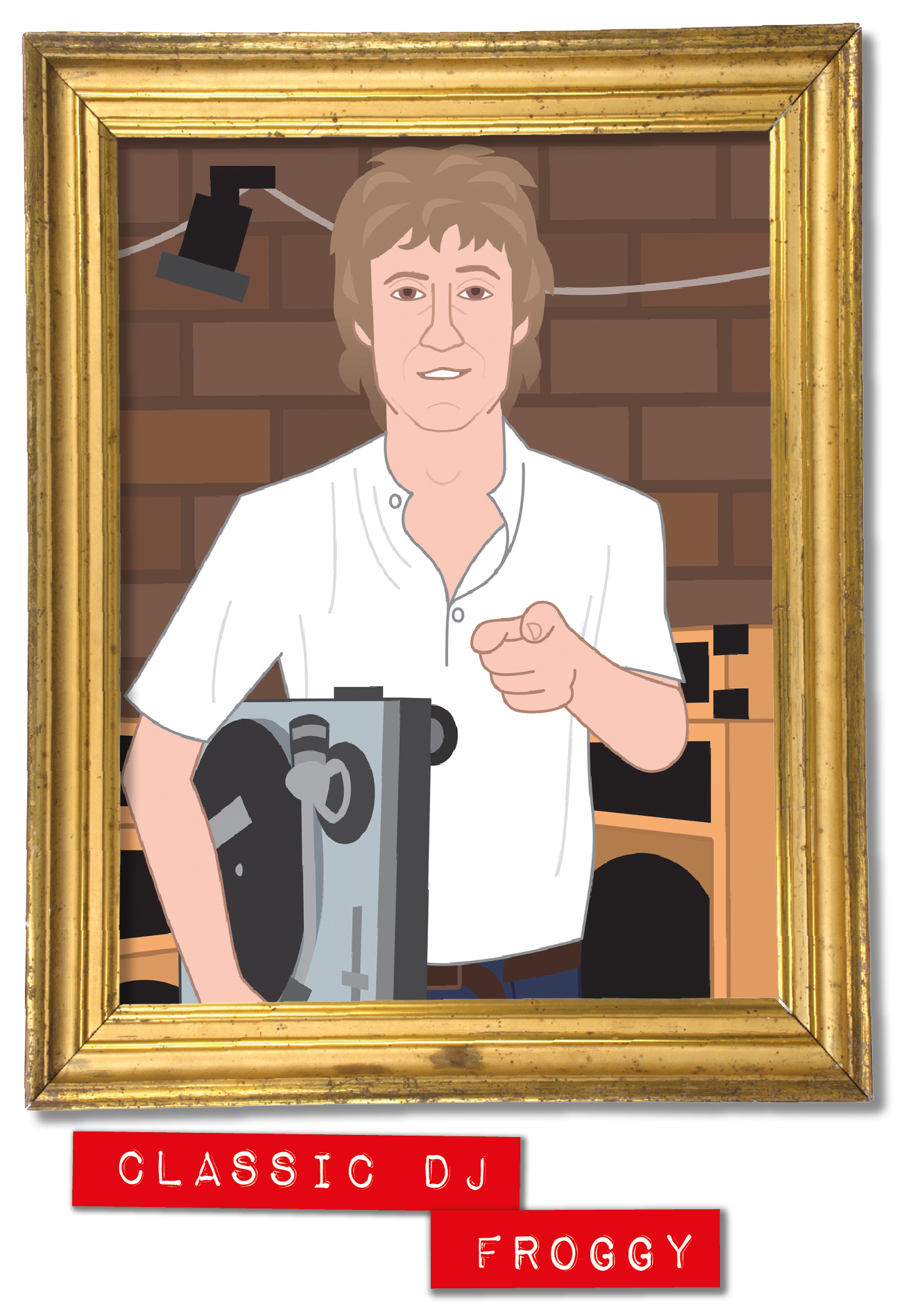 East London-born in 1949, Froggy (Steve Howlett) was a British mixing pioneer, owning the sound system that powered the South’s Soul Mafia events, most notably the Caister Weekenders, beginning in 1979 and continuing to date. He acquired a love for both records and electronics as a youngster, his father employed by Plessey’s, who made record players and radiograms.

His DJ breakthrough came in 1971 at London’s Bird’s Nest and, for a four year span, he’d regularly take his mobile set-up to Lincolnshire’s Scunthorpe Baths to play between visiting pop bands, plus Radio 1 DJs including Johnnie Walker, Dave Lee Travis and, most importantly, Emperor Rosko.

The Wolfman Jack-styled Rosko, one of radio’s most musically astute DJs, with a strong soul leaning, boasted an impressive sound system for live appearances. It was on witnessing Rosko in full-effect that Froggy’s trajectory was set. However, it was Dave Lee Travis that prompted his next moves, approaching Froggy to tour with him, resulting in the DLT Roadshow and a five-year association. Having previously played there with DLT, Froggy began his successful residency at London’s Southgate Royalty in 1978, bringing in his sound system and quickly winning over the crowd with his soul, funk and disco selections.

Hooking-up with the Mafia DJs, headed by club legend Chris Hill, Radio London’s Robbie Vincent and Capital Radio’s Greg Edwards, his sound system was a crucial component at ‘78’s National Soul Festival all-dayer at Tiffany’s Purley, a landmark for the emerging jazz-funk movement. As part of the Mafia, which also included Jeff Young, Sean French, Chris Brown and Pete Tong, he was key to their all-dayer/weekender events.

Although introduced to mixing via Argentinian-born American Greg James at London’s Embassy, his epiphany came during a 1979 trip to New York’s New Music Seminar, where he saw Paradise Garage DJ Larry Levan close-up. He’d own the UK’s first pair of Technics SL1200s and co-design the Matamp Supernova mixer (one of which I’d use myself in 1983 when demonstrating live mixing on TV’s ‘The Tube’).

His reputation grew via mixes for Peter Powell’s Radio 1 show in the early-‘80s, but the Mafia’s rejection of the new electro direction would impact negatively on Froggy – the Mafia losing relevance as a younger generation of electro-influenced DJs embraced mixing.

His sound system was hired out for rare groove warehouse parties and later rave events, whilst he subsequently hosted his own Capital Radio show, but, despite doing various remixes, his place at the vanguard of mixing diminished amidst the explosion of hip-hop, house and techno that dictated the new horizons. Froggy died following a brain haemorrhage in 2008 – his legacy finally coming to light. 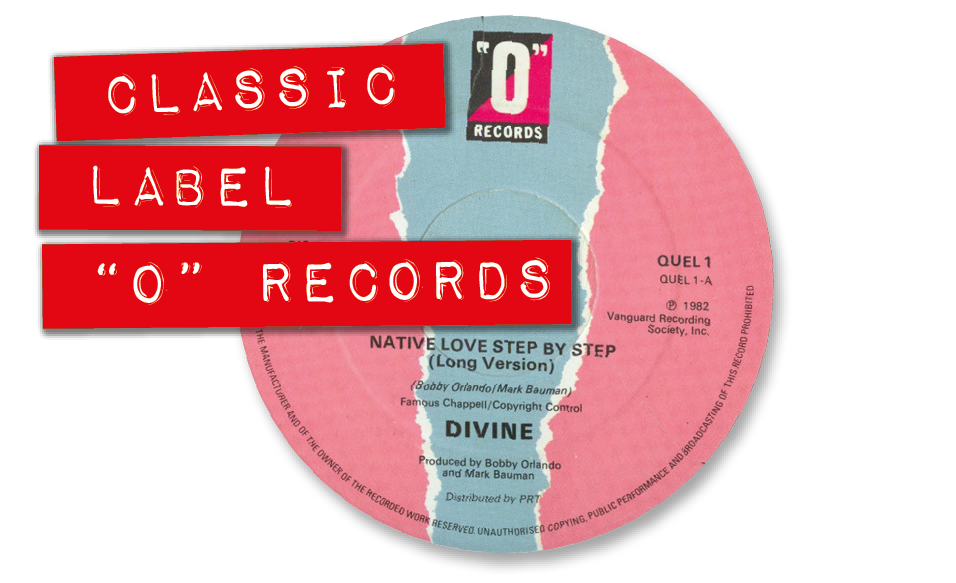 Born in 1958, Italian-American Bobby Orlando, a multi-instrumentalist, played in glam rock bands as a teenager but his attention shifted to disco as the ‘70s unfurled. Having found work as studio engineer in the late ‘70s, he turned his hand to production - his debut project the Bee Gees-inspired ‘Dancin’’ by Tod Foster.

He first found success with one of Kid Creole’s original Coconuts, Roni Griffith. 1980’s ‘Mondo Man’ reached #36 on the US Dance chart, improved on by a #30 placing for ’81’s ‘Desire/I Want Your Lovin’, before ‘82’s ‘(The Best Part of) Breakin' Up’ just missed the top spot.

He’d establish his own distinctive sound, defined by Giorgio Moroder-inspired running electronic basslines, plus his trademark cowbell patterns. This driving New York/European disco assault took the gay scene by storm, and along with the West Coast productions of Patrick Cowley, helped define the Hi-NRG direction that would, in turn, influence wider popular music.

Running parallel with Roni Griffith’s Vanguard releases, in 1980 he began issuing tracks on his own “O” Records. Harris Glenn Milstead, AKA Divine, an outrageously flamboyant drag queen and actor associated with filmmaker John Waters, most notably the star of the notorious ‘Pink Flamingos’ (1972), became an unlikely dance diva thanks to early-‘80s club hits like ‘Native Love (Step By Step)’, ‘Shoot Your Shot’ and ‘Love Reaction’ (which shamelessly pilfered New Order’s ‘Blue Monday’). The Flirts, a girl-group vehicle for Orlando’s writing/production, enjoyed a healthy run of club hits, their ’82 breakthrough coming with ‘Passion’, whilst the Shep Pettibone mixed ‘You & Me’ topped the US dance chart in ‘85.

There were also Bobby “O” solo releases, the biggest of which, 1982’s ‘I’m So Hot For You’ and ‘She Has A Way’, were both remixed by John ‘Jellybean’ Benitez. In 1984 he’d produce the original ‘West End Girls’, along with a number of other tracks, for the then unknown UK pop act The Pet Shop Boys (although it was the re-recorded Stephen Hague production that took it to the top of the UK chart the following year). When EMI signed the duo in 1985 Orlando, in return for cutting contractual ties, would receive a settlement entitling him to significant royalties from future sales.

He’d wind down his music interests in 1987, selling the label to Henry Stone, legendary owner of T.K. Records, and departing from the industry for a number of years.

Noting that he’d rather ‘put out 200 records that sell 5000 copies each than one record that sells a million’, it wasn’t the big successes that defined Orlando’s career but the myriad of minor successes that spread via gay clubs worldwide. 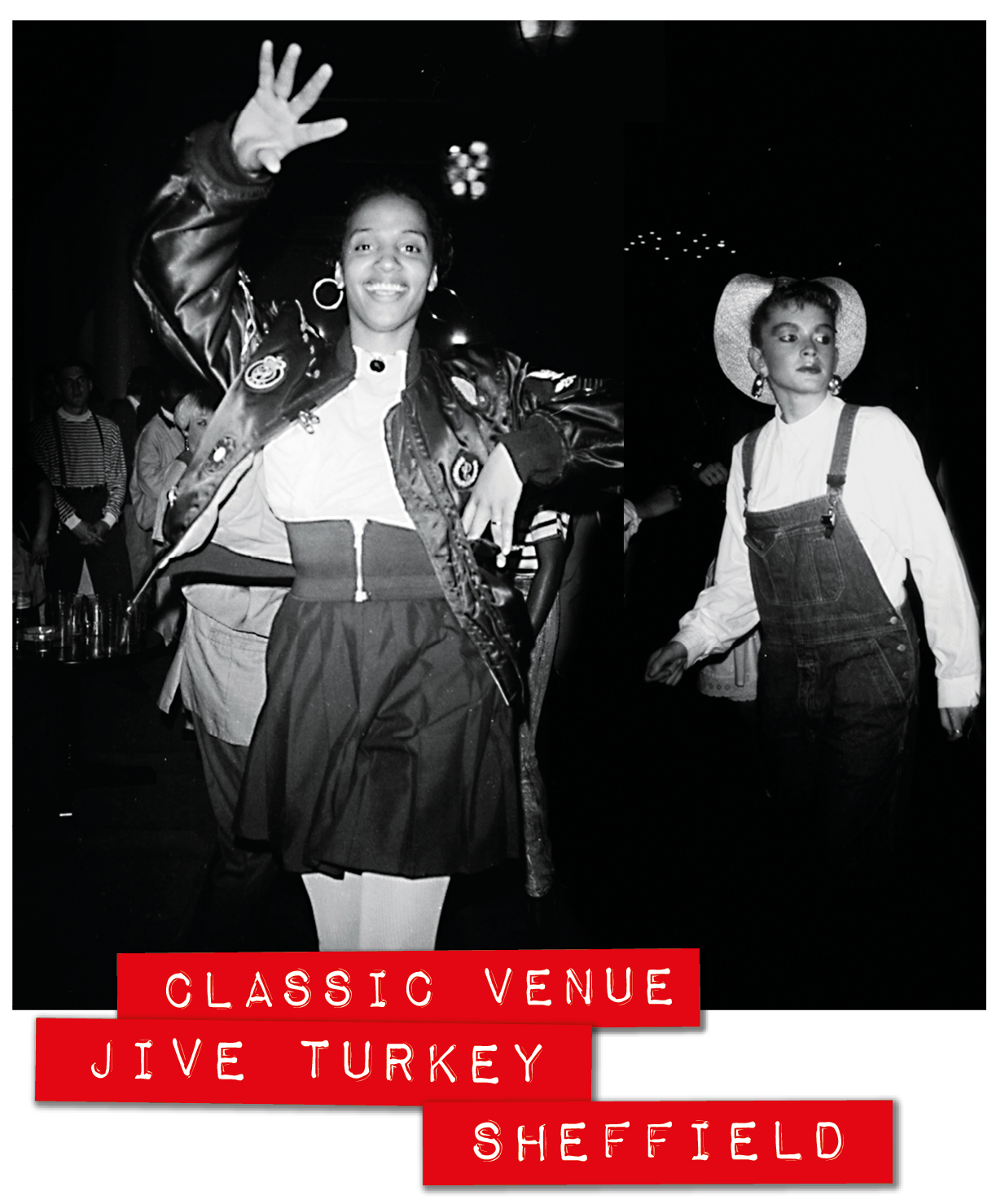 Launched in the mid-‘80s by Richard Barratt (AKA Parrot) at Sheffield’s Mona Lisa’s, Jive Turkey appeared at the perfect moment to break the incoming house sound in the city, heralding the onrushing rave era, and inspiring Warp Records, the city’s famous dance label (for whom Parrot and Richard H. Kirk would record cult-classic ‘Testone’ as Sweet Exorcist in 1990).

Arising from the necessity for a good party in Sheffield, the opening Saturday in Autumn 1985 was Parrot’s DJ debut. Having never been attached to the new wave/futurist scene that loomed large over Sheffield in the late ‘70s/early ‘80s, he was keen to explore a different musical path, citing DJs like John Tracey AKA Disco John, who later ended up at Manchester’s Haçienda, and Northern soul stalwart Richard Searling, who had a show on Sheffield’s Radio Hallam, as local influences.

Parrot was joined the following year by Winston Hazel (AKA Winni), previously a member of the b-boy crew Smak 19, who’d started to DJ and was primed to pursue dance music’s next phase, moving from the electro era to house.

As was generally the case with black music venues pre-rave, it wasn’t solely one style of music on offer at Jive Turkey, the night providing a spectrum of dance sounds, moving between tracks like Strafe’s ‘Set It Off’, ‘Under Mi Sleng Teng’ by Wayne Smith, J.M. Silk’s ‘Music Is The Key’, ‘Rock The Bells’ by LL Cool J and Fatback Band’s ‘Spanish Hustle’.

The audience comprised of black kids (many with serious dancing skills), Sheffield electronic musicians, old soulies, jazz fans and indie kids – different sounds appealing to different parts of the crowd. Mona Lisa’s changed hands after a few years and Jive Turkey was hosted for a time at Sheffield’s City Hall until it moved back to its original location at the renamed Occasions in ’88, where it continued to thrive. However, as the ‘80s turned into the ‘90s, the night gradually began to lose its mojo, finally ending in 1992. 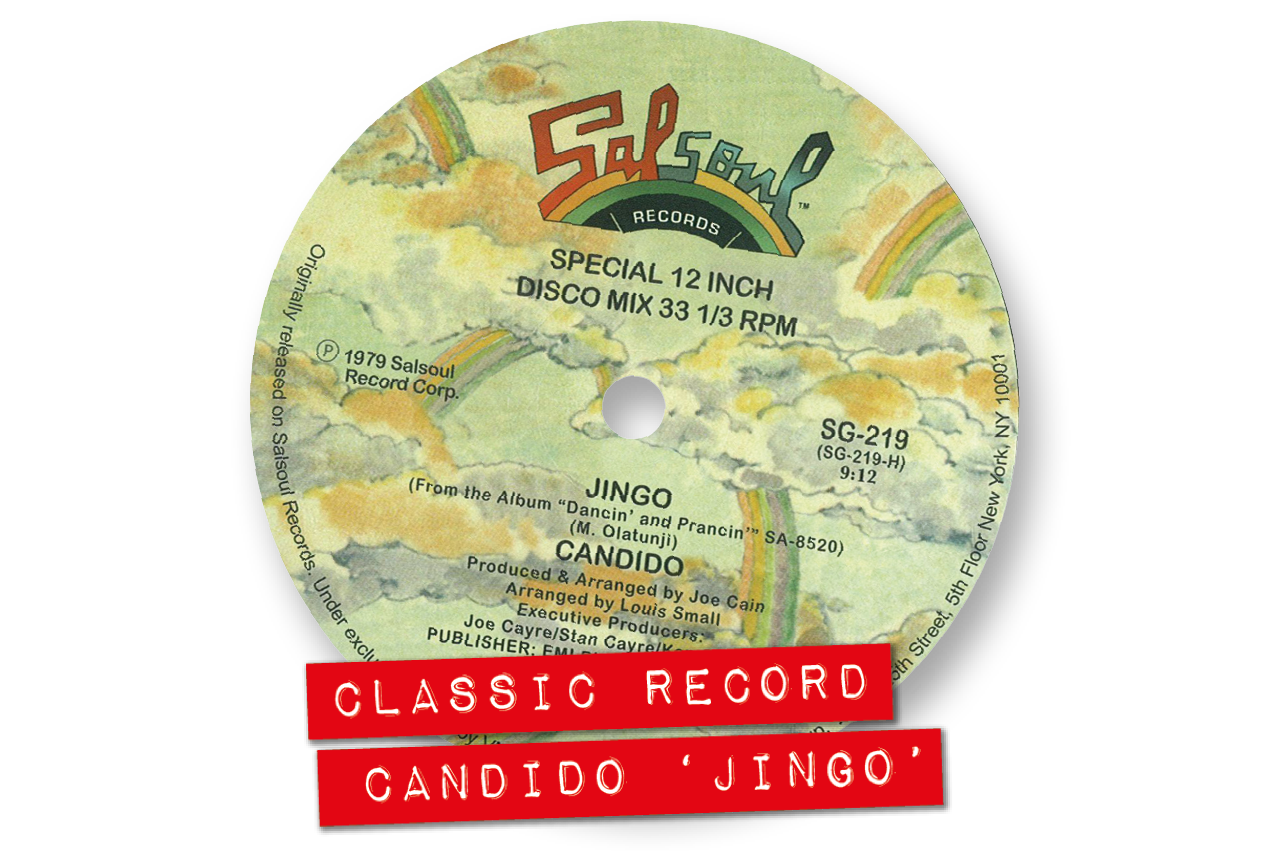 Taken from his 1979 LP ‘Dancin’ & Prancin’’ on Salsoul Records, Candido’s ‘Jingo’ is a formidable Latin-disco force that probably best exemplifies the ethos behind the label.

When it comes to the congas, Cuban Candido Camero, born in 1921, is the percussion instruments greatest exponent – the most recorded conga drummer in the history of jazz.

Moving to the US in 1946, the man with a seemingly endless energy reserve pioneered the use of bongos and congas simultaneously, and his unrivalled skills saw him rise to prominence during the next three decades as a top session player working with everyone from Duke Ellington to Tito Puente to Ray Charles. In addition, he’d release a plethora of his own material during this period.

When Candido found himself without a label in the late ‘70s New York disco powerhouse, Salsoul, with its strong Latin slant, pounced at the opportunity to sign him up. Candido released two albums for Salsoul, but it was his debut he’s best remembered for, which also contained further dance floor hits in ‘Thousand Finger Man’ and the title track. However, it was ’Jingo’, the club oriented cover of a Nigerian classic, that provided the high point.

‘Drums Of Passion’ by Nigerian percussionist, Babatunde Olatunji, was a best-selling album in the US following its 1960 release. It included the track ‘Gin-Go-Lo-Ba’, a fiery and raw percussive workout that would become a favourite of seminal NYC DJ Francis Grasso later down the line, whilst also finding favour at David Mancuso’s esoteric Loft parties.

Covered on numerous occasions, including an uncredited 1964 adaptation from Parisian songwriter Serge Gainsbourg, titled ‘Marabout’, and a credited version five years later by psychedelic Latin-rock outfit Santana, featured on their self-titled debut LP, which brought the track to the Woodstock generation when the San Franciscan band performed at the era-defining festival. A later 1987 recording by John “Jellybean” Benitez would reach #2 on the US dance chart.

Candido’s version would become one of those rare tracks that remained popular on both an underground and a mainstream level. Despite becoming a firm disco favourite, ‘Jingo’ had no problem in crossing over to the specialist jazz-funk scene in the UK, where it acquired classic status alongside other disco records with a jazz tinge, like Francine McGee’s ‘Delirium’ and ‘Dreaming A Dream’ by the Crown Heights Affair.

Shep Pettibone’s 1983 Candido remix, ‘Jingo Breakdown’, gave the track a new lease of life, but the original remains the quintessential version - having never lost its magic, it sounds just as vital today as ever.