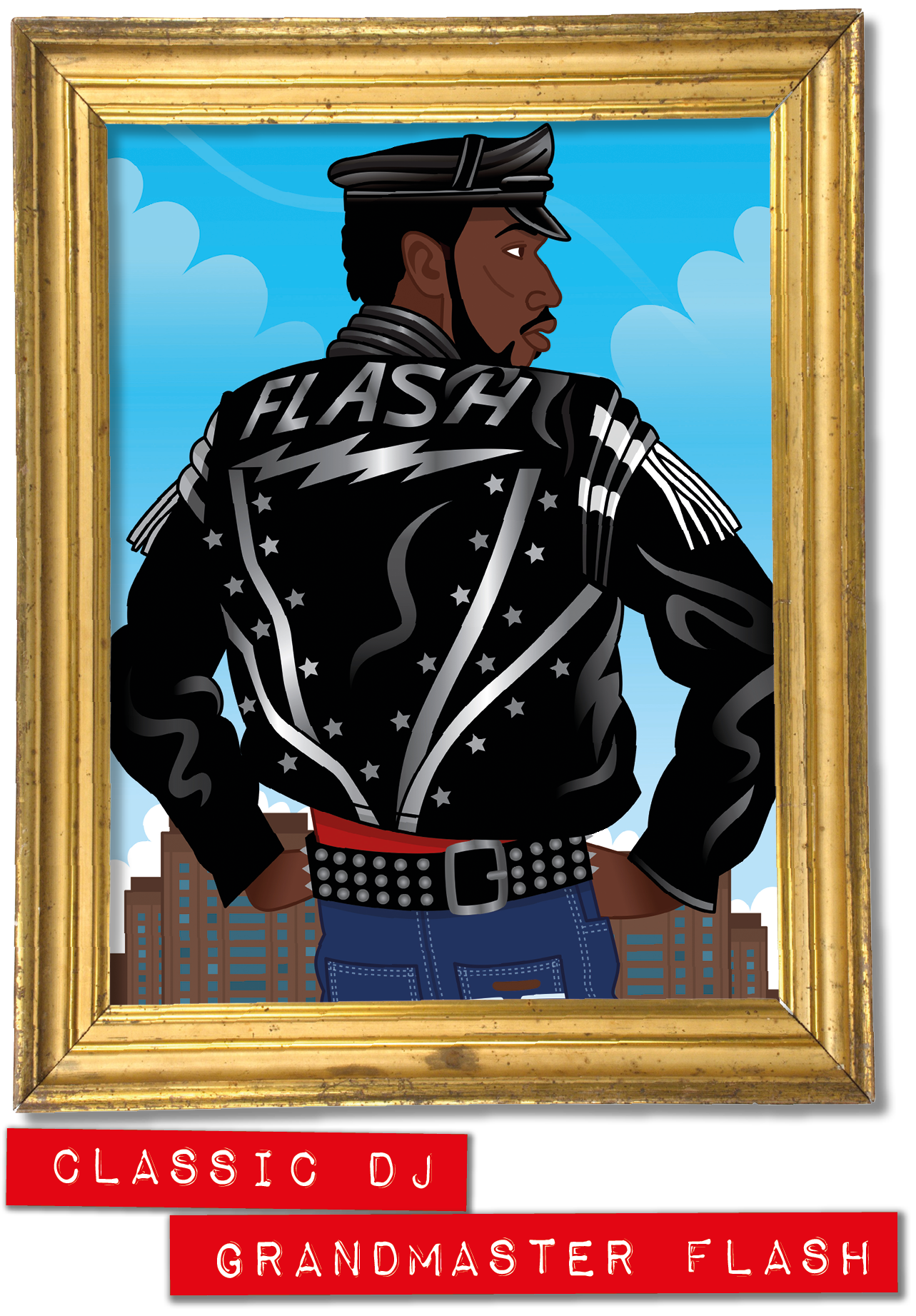 Joseph Sadler AKA Grandmaster Flash was born on new years day 1958 to Barbadian parents. Growing up in the Bronx, he learned how to repair electronic equipment and became well versed in music, listening to his father’s collection of Caribbean and black American records.

As a teenager, Flash studied the styles of the Bronx DJs who preceded him, most notably Grandmaster Flowers, Kool Herc and Pete Jones, soon beginning to innovate his own approach.

Similar to Herc’s merry-go-round technique, Flash developed beat juggling – lining up two of the same record and switching between them in order to play the same part over and over. This was mostly used to elongate the breaks, which ignited the Bronx block parties. In unison with this he’d isolate short segments of tracks, then rhythmically cut them over the top of the track playing, whilst finessing Grand Wizzard Theodore’s scratching invention.

He set up his own crew, Grandmaster Flash & The Three MCs, in the mid-‘70s, with Cowboy (Keith Wiggins), who, along with Lovebug Starski, coined the term hip-hop, plus brothers Melle Mel and Kidd Creole, (Melvin and Nathaniel Glover). They were later joined by Rahiem (Guy Williams) and Scorpio (Eddie Morris) and became Grandmaster Flash & The Furious Five, pioneers of freestyle rap battles.

In 1978 Flash & The Five secured a weekly slot at Disco Fever, the Bronx’s main nightspot, and by 1979 they’d signed to Enjoy Records, releasing their debut single, ‘Superappin’. They joined Sugar Hill the following year, which saw the release of the seminal cut-up ‘The Adventures Of Grandmaster Flash On The Wheels Of Steel’, a truly groundbreaking record made out of other records – this marked the first instance of turntablism being committed to vinyl. The next year would see the crew release their most celebrated single, ‘The Message’, an electro rap masterpiece, highlighting inner city struggle – it was hip-hop with a social conscience, and a major hit, but Flash wasn’t on it. Although key to live performances, Flash was increasingly marginalised in the recording studio, leading to growing tensions and the demise of the crew.

With Flash out of the picture, the Grandmaster name itself came into dispute - the track ‘White Lines (Don’t Don’t Do It)’ credited to Grandmaster & Melle Mel. At the same time Flash found himself embroiled in a dispute with Sugar Hill over royalties, hampering his career.

Flash, who along with Kool Herc and Afrika Bambaataa, is revered amongst hip-hop’s ‘holy trinity’, has DJ’d globally down the years. Grandmaster Flash & The Furious Five were the first hip-hop act inducted into the Rock & Roll Hall Of Fame, in 2007. 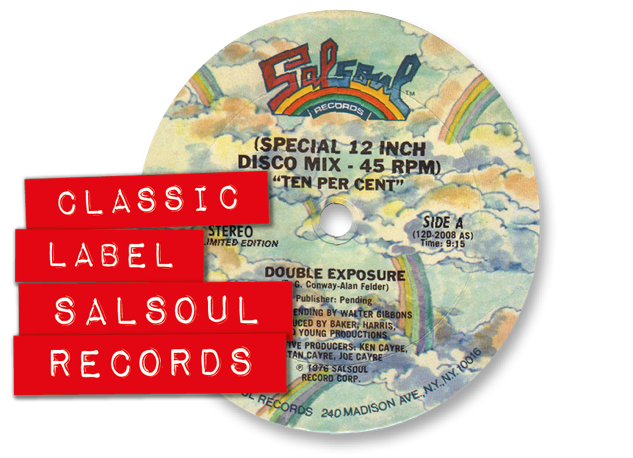 Founded by the Cayre brothers, who’d previously distributed Spanish language recordings via their company Caytronics, based in New York, Salsoul Records is widely acknowledged as NYC’s most essential label of the disco era – its percussive slant setting it apart, whilst celebrating its Latino foundation.

With an eye on the city’s significant Puerto Rican market, whose music of choice was Salsa, the brothers launched Salsa label Mericana in 1972, pulling off a major coup when prising Joe Bataan from the clutches of established Latin label Fania.

It would be Bataan’s album ‘Salsoul’ that would lead to the formation of a recording company of the same name – the term, combining Soul and Salsa - with Mericana subsequently securing a licensing deal for Bataan with Epic Records, which enabled them to take one of dance music’s boldest ever steps.

Philadelphia International Records was then the leading dance music label, its in-house disco orchestra, MFSB, backing other acts as well as recording their own material. When some of its key musicians fell into dispute over payments, Salsoul, armed with the money from Epic, offered them contracts, creating their own Salsoul Orchestra in the process. Apart from MFSB arranger Vincent Montana Jr., they’d also nabbed the crack production team/rhythm section of Baker-Harris-Young, who’d first come to prominence via their own group, The Trammps. Salsoul certainly meant business, having set up shop in 1974.

It was the first label to release a 12” single, the Baker-Harris-Young produced ‘Ten Percent’ by Double Exposure, complete with a Walter Gibbons edit, credited as ‘disco blending’, that would inspire the coming generation of remixers.

Salsoul also brought in remix pioneer Tom Moulton to add his magic touch to a number of releases, whilst 1979’s ‘I Got My Mind Made Up’ by Instant Funk provided Paradise Garage DJ, Larry Levan, with his remix breakthrough, helping elevate his status to new heights.

Loleatta Holloway staked her diva credentials, not least on ‘Love Sensation’, later sampled by Black Box on the UK #1 ‘Ride On Time’ (1990), as did Jocelyn Brown, then the singer with Inner Life.

Although Salsoul’s golden era is seen as the late ‘70s, it would release a steady stream of dance floor favourites throughout the early ‘80s, whilst also issuing remixed versions of earlier classics like ‘Let No Man Put Asunder’ by First Choice and Candido’s ‘Jingo’ – Shep Pettibone hoovering up most of the remix credits during this time.

The label operated until 1985, and although it had limited crossover success, it was beloved by the disco community and would be a main source of inspiration for Chicago’s house music movement. 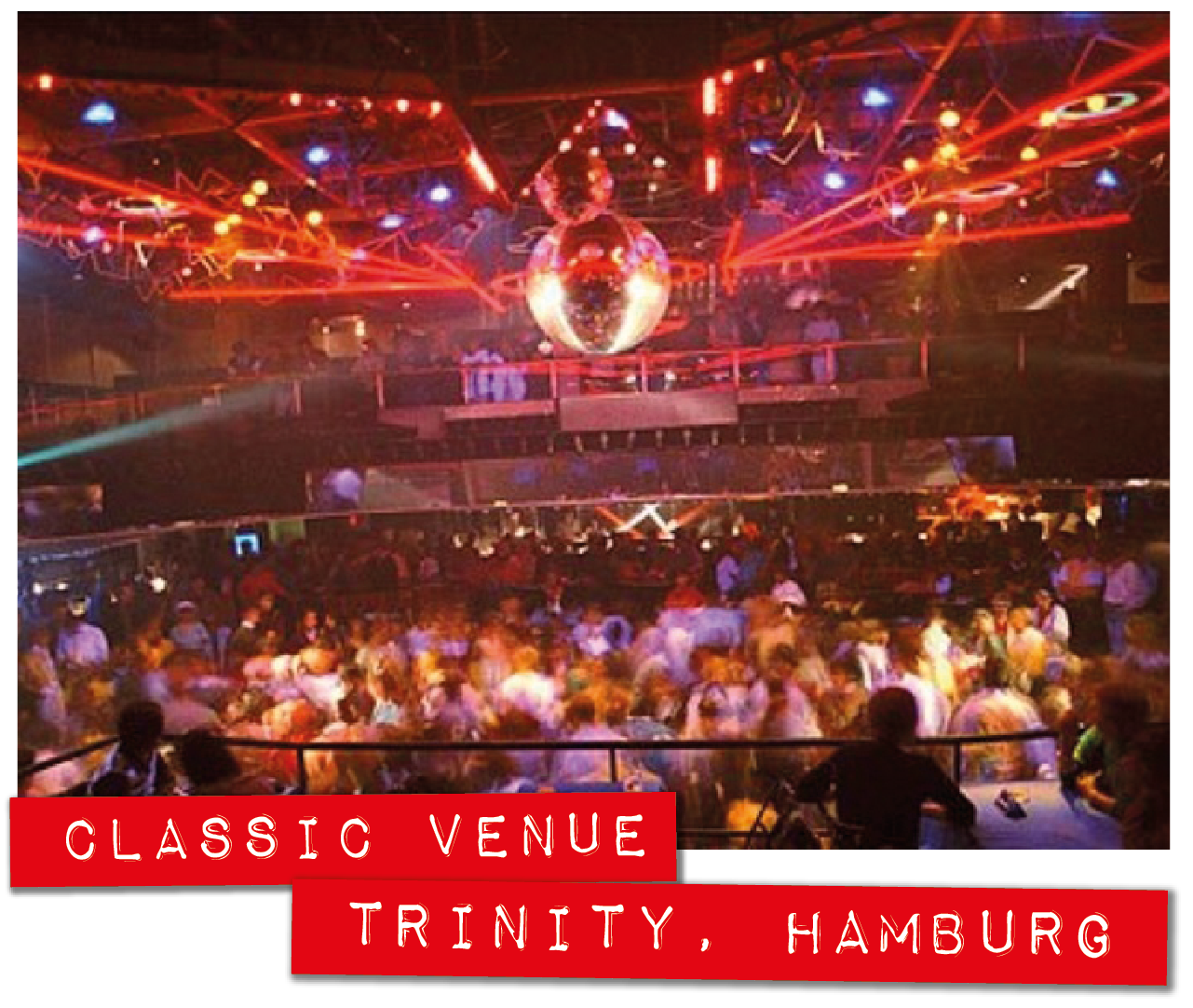 Having visited the USA in the summer of ’77, and seen some of the finest discotheques in the country, most notably those in New York, German entrepreneur Jens Engelhard decided it was time to bring a slice of the big apple back with him to Hamburg, and set about plans for one of the largest clubs in Europe – a German Studio 54.

Hamburg, a tough port city, had a long connection with nightlife, not least via its history with The Beatles and other British bands who played residencies there during the early ‘60s. Engelhard found the perfect location for this venue - a building from around the turn of the 20th century that originally had served as a dance palace for the well-heeled called ‘Kaisersaal’, before transforming into a cinema – it found itself in the midst of the fighting during World War II and as such needed much work done to it.

Rebuilt almost from the ground up, the venue was a costly endeavour and took a lot of time to complete, however when it was finished it boasted two floors of clubbing space, more than 1000 lamps and spotlights and over 300 meters of neon tubes all controlled by a specialist light operator. Fitted by New York’s Design Circuit Inc. who installed a 10,000 watt Richard Long sound system (both Studio 54 and the Paradise Garage having Long created systems), it was a hugely ambitious project.

The club opened in 1978, with Sharon Lee, an American DJ with Studio 54 credentials, brought in to man the decks. Lee’s association with Trinity would last until August 1979, and she holds a revered place in German DJ culture, having brought the mixing technique over from the US.

After Lee left the club, Peter Römer took up the baton, putting to test the mixing skills picked up from his predecessor. The combination of Römer and lighting operator Jörg Schönemann’s proved a huge success and they ended up working around Germany with the turn of the new decade, as well as in the UK where they were brought to Kent club Stage 3 for a few months in 1980. Römer returned to Trinity in 1981 and was its longest serving DJ.

The club also hosted live appearances from artists including Gloria Gaynor, Level 42 and Depeche Mode. Primed for the electronic dance directions of the early-‘80s, it moved with the times as music became increasingly machine-driven.

Trinity closed in 1986, Engelhard continuing to operate the venue for the next 4 years as Offline and Bass. Making a brief comeback under its original name, Trinity’s doors finally shut forever in 1992. 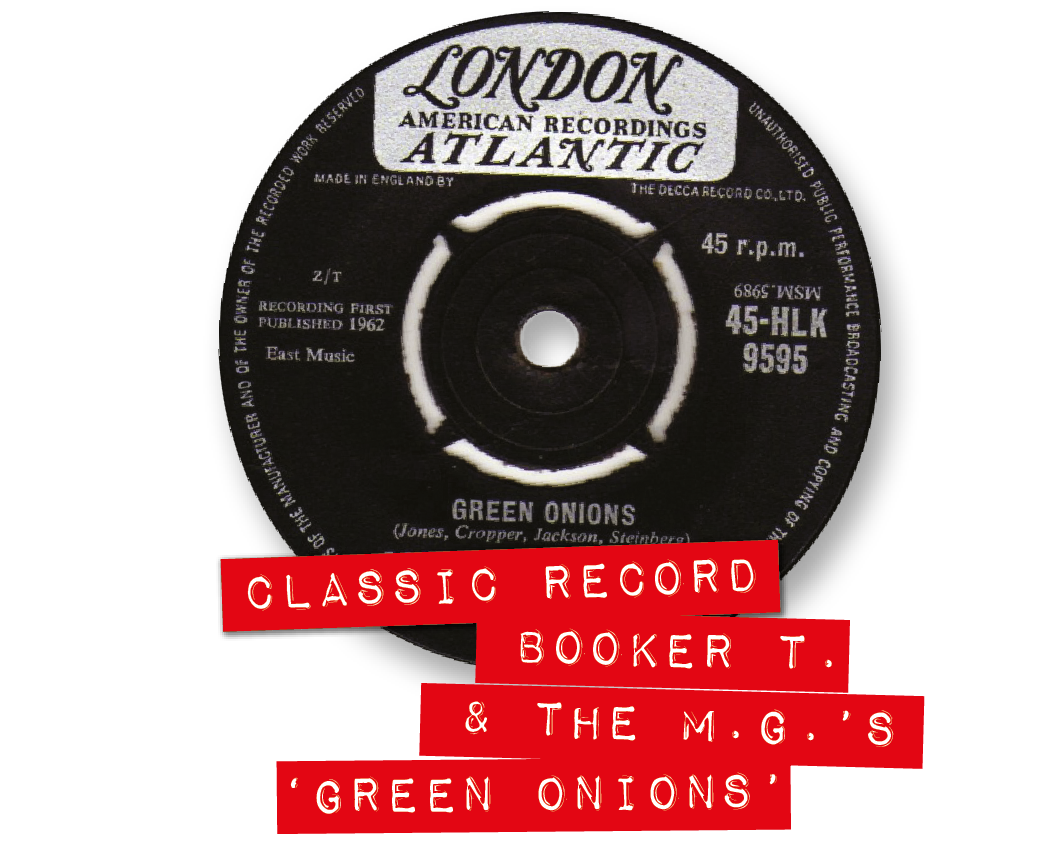 The epitome of cool on wax, it never ceases to amaze that this classic instrumental was recorded as early as 1962. A twelve-bar blues that grooves around keyboardist Booker T. Jones’ killer Hammond organ, whilst featuring Steve Cropper’s Fender Telecaster guitar stylings. This was underpinned by Lewie Steinberg’s walking bass, with ‘the human metronome’, Al Jackson, locking down the beats.

That’s all it is, 4 musicians doing their thing – nothing over fussy, everything right in the pocket. This unit, with Donald ‘Duck’ Dunn taking over from Steinberg in 1965, apart from being Booker T. & The M.G.’s (Memphis Group), were also the studio band throughout much of the ‘60s for the great R&B label Stax – a crack crew of musicians who would back some of soul music’s greats, including Otis Redding, Sam & Dave and Wilson Pickett. They were also one of the first racially integrated groups, with both black and white members.

‘Green Onions’ became a major hit in the US, peaking at #3 on the Billboard chart, whilst scoring an R&B  #1. Across the Atlantic, although issued via the London label, it failed to show in what was still a pre-Beatlemania era, although it gained cult status via the Mods, whose music of choice was rhythm & blues.

Always regarded as a classic oldie, despite never having been in the UK chart, it was a once heard never forgotten track. However, it was to finally become a British hit in 1979, 17 years after its release, when a new generation were exposed to it.

The conduit was ‘Quadrophenia’, a movie based on The Who’s rock opera of the same name, which centred around the life of a young Mod in 1964 and the infamous pitched battle between Mods and Rockers on Brighton seafront that summer, which made these contrasting British youth movements headline news – the Mods with their scooters and smart attire, the Rockers on motorbikes in their leathers.

In ‘Quadrophenia’, ‘Green Onions’ is playing at the start of the Brighton dance hall scene, as the camera scans a dance floor packed full of Mods. This film sparked a Mod revival and, as a consequence, ‘Green Onions’ would go all the way to #7 on the UK chart.

Check out the next Discotheque Archives here