Saytek: How I Play Live | DJMagAdmin.com Skip to main content

Saytek: How I Play Live

Saytek: How I Play Live

Though more and more artists are bringing live elements into their tech riders, Saytek is no bandwagoner. His first shows were in 2003, when a Roland MC-909 was at the heart of his setup. 15 years later and the core values are the same – deep, hypnotic house and techno, all performed live and heavily improvised.

With supporters including Carl Cox, Kevin Saunderson and Maceo Plex, we caught up with the London-based producer to find out more about his evolution as a live electronic music artist. Check his recent release on Carl's live-specific label Awesome Soundwave here and for more live electronic music insight, check our How I Play Live features with Ross from Friends and Detroit Swindle.

Why was it important to you to develop a live show alongside DJing?
"Well actually I never DJ’d, I skipped that stage completely! I learnt to produce on drum machines, synths and grooveboxes and when I was making tracks in my hardware studio back in the day, I would spend ages jamming out parts on the analogue mixer, muting and unmuting parts. I found it fun and the gear had loads of knobs and faders so I would get lost in this process and would procrastinate for hours. When Ableton came out I loved that as well and coincidentally it was the time of the vinyl crash when everyone suddenly stopped selling thousands of records so that spurred me on to take my sounds out live. That was 2003 and I have been focused on live ever since!"

How did you initially intend your setup to work?
"Pretty much the same way as now! Ableton Session View sync'd up via MIDI to grooveboxes, analogue synths and drum machines with outboard effects. However, intending it to work and it actually working that way took a bit of time!"

How has the setup changed over time?
"Ah it's evolved and morphed massively over the years – different hardware, multiple laptops. There was a period of nearly 10 years where the Roland MC-909 was the main bit of hardware. I loved that box, it was very powerful and great for live but after eight years my original machine packed up and I bought one second-hand that broke as well and after my third machine I gave up and switched to Elektron. It was a great move, very different way of working but a huge inspiration." 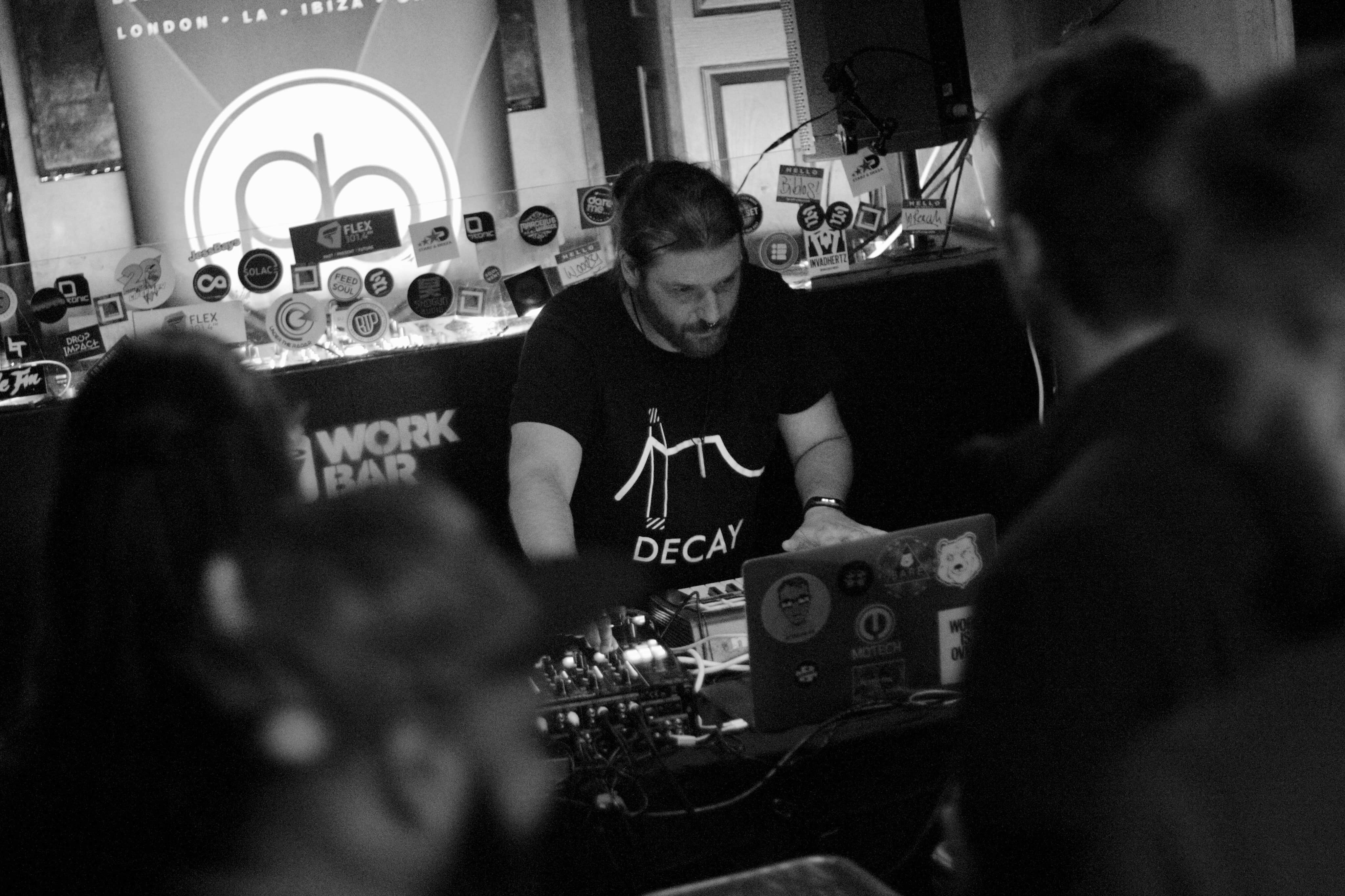 What’s your setup now and how does it work?

"So basically, I run all the onboard sequencers on the Elektron gear and Novation Circuit and I slave everything to the ERM MIDI clock. This way I can call up patterns on the gear as I need to – gives me a lot of room for improvisation and I actually love sequencing on hardware. It's more limited but ultimately more rewarding and I tend to come up with music I wouldn't necessarily come up with on a computer. I run the D16 emulators live in Ableton alongside loads of loops I have made in Native Instruments Maschine.

"I bounce these out as individual parts so I can arrange everything live. Audio wise, I run two channels of Ableton into the DJ mixer and the Analog Rytm goes into the third channel and the Analog Four into the fourth and the Circuit goes into the back to be processed by the onboard FX. I daisy-chain the Kaoss Pad and RMX-1000 out of the send and return of the mixer and I've put my own samples in the RMX so I can programme new beats and grooves in real-time. The way I have it set up means I can create dynamic, long sets with the same kind of control and FX as a DJ would, meaning I can respond to a crowd and the same elements can be performed in different ways. For example, I can go deeper with fewer breakdowns and more FX or I can go tougher with big breakdowns and drops."

What are the main challenges in the setup?
"The main one was and still is to an extent transporting the kit to international gigs, although nowadays I would say I have it pretty locked down with everything fitting into one hand luggage and one hold bag! But still, long journeys with no sleep and heavy bags is definitely the hardest thing about what I do. Sometimes I have to walk for what feels like miles with a backpack full of analogue synths at airports, unpack everything at customs etc."

What advice would you give to someone who wants to take their music live?
"Make the music you love and don't get sucked into the idea that buying all the latest kit will make you a better artist. Learn to use the kit you have like the back of your hand before adding to it! There's also this idea floating about that you shouldn’t use Ableton – I see a lot of people hiding laptops on stage because they don't think it's cool, but some of the best acts use it and I am seldom impressed by the music of people who always shout about being "hardware only" or "DAW-less". What matters is the music itself and the equipment is just tool for this!"

What do you think is behind the current growing trend in live electronic music?
"I think there are a number of reasons for this – DJ technology has grown so people [have an] urge to do something different. Also Ableton changed a lot of things and the recent swing back to companies making live-friendly hardware. One of the biggest factors though is social media and YouTube – a few years back hardly anyone knew what it was to do a live set, now with Boiler Room on YouTube and all the clips on Instagram and live streams on Facebook, I think people have become a lot more aware of live electronic music."

What piece of gear would you love to add to your setup and why?
"At the moment I wouldn't add anything, in fact, I bought a new bit of gear recently and sent it back as It hampered my creativity I am happy with what I have got for now!"