Modeselektor: How I Play Live | DJMagAdmin.com Skip to main content

Modeselektor: How I Play Live

Modeselektor: How I Play Live

We met up with the German duo to find out how their live show works and to understand their performance ethos...

Declan McGlynn
Facebook Twitter WhatsApp
Modeselektor are one of the most prolific electronic music duos in the world. Releasing their first records in 1999, they quickly found a home on Ellen Allien's iconic BPitch Control before founding their own seminal imprint Monkeytown. After conquering the clubs, they took on venues as Moderat, part of a collaboration with Apparat. Now they're a duo again and are touring their impressive live show once more, incorporating visuals, lighting FX and live synthesizers. We caught up with them to find out how it works and what they're advice would be for someone taking their show on the road.
What do you want to play beyond DJing?
"The borders between the two kinds of performance merge but there is a core difference. It’s like when preparing a steak or a vegetarian dish: the elements have to be done on point. With a live show, you can act more on point. A live show could be compared to a theatre play; a DJ set to a longer feature film or a series. The impact of a live show can be bigger."
What were the biggest challenges in putting your live show together?
"When you produce an album and prepare to present it in a live show, the following questions come up: the setup size – if it's it going to be performed at on a festival or club stage – and the equipment’s weight – if it’s going to be transported by bus, truck or on a plane. In terms of content, it goes down to every detail, and above all, how to integrate tracks created with an older setup into a new setup."
What does your setup consist of?
"We have two workstations on two custom made tables lined next to each other. On one table there is the main computer with Ableton Live, APC40 controller and Maschine MK3. On the other table, we use a 12-channel analogue mixer, mic, live-sync'd via MIDI, a Korg monologue, a delay pedal and each table has a MOD duo pedal for vocal FX."
What would you change about the setup if you could?
"The actual setup works great. It can happen that digital connections get lost, meaning that soundcards or controllers just turn off unexpectedly - it's happened before. In that case, there is a secret emergency button: if you press this button, a second setup with the “helicopter” comes up from above so you can keep playing." 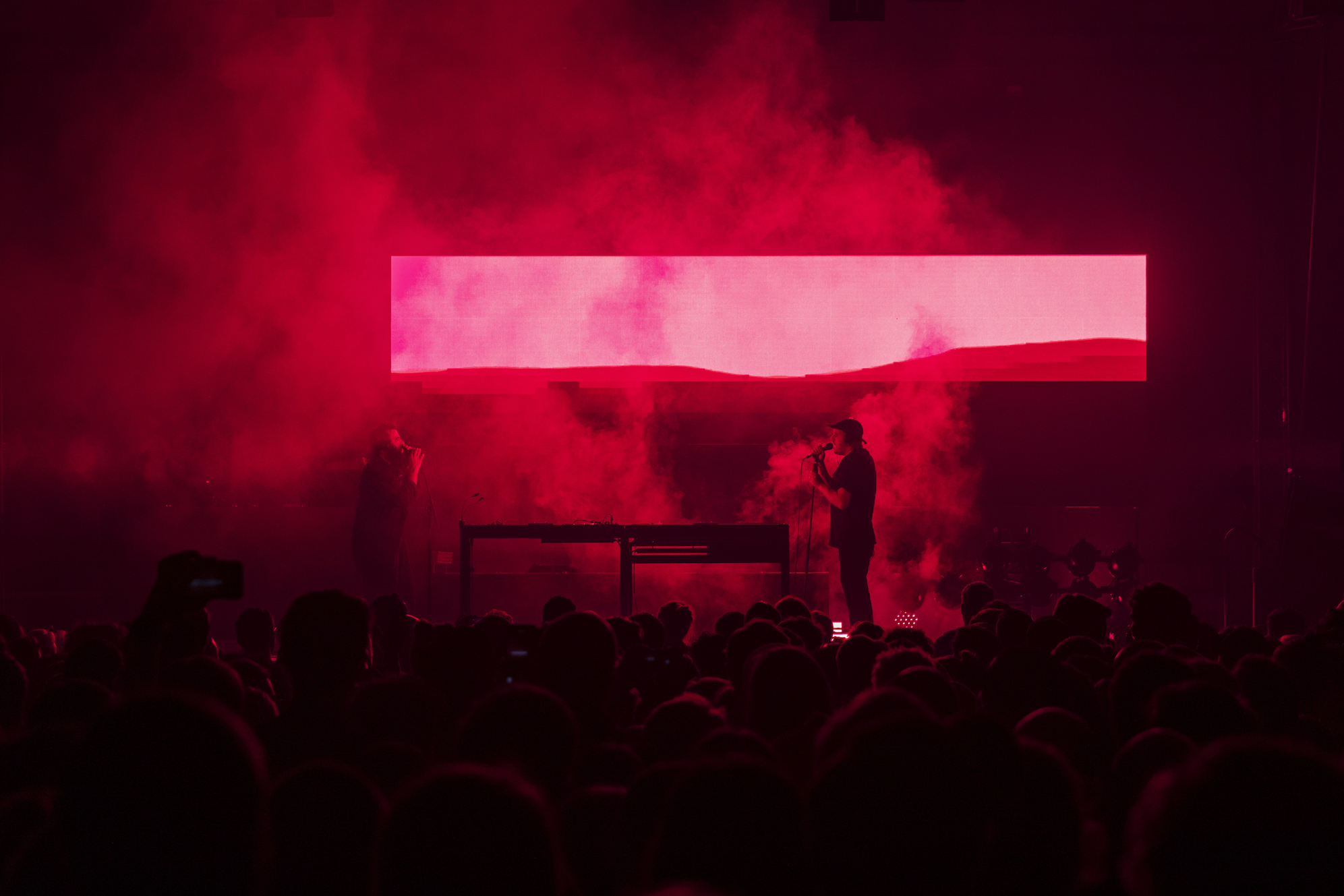 What do you think is the current rise in live electronic music, in both more artists playing live and more tech companies creating kit specifically for live?
"Of course, that has changed extremely. Technology, in general, has developed so fast over the past few years that we have nearly a tool for every application. Software or hardware are used in many ways to perform functions beyond the idea for which they were created. I would like to recall an example which has been mentioned often. In 1982 the Japanese manufacturer Roland had launched the TB-303: the idea behind it was to provide bass accompaniment for guitarists.
"For most guitarists, the programming was often too complicated or produced sounds rather far from the original acoustic so this device disappeared quickly from the market. Then it was rediscovered the band Section 25 with the song 'Looking From A Hilltop (restructure)' in 1984 - one of the first pre-acid tracks ever. Two years later in 1987, it was used again by DJ Pierre and Phuture - in my opinion, the truest acid sounds in this world. I tell all this because we have the feeling that the producers have been given everything 'ready to play'. When it comes to modular systems it's a different case. You have a plan to create the ideas that you have in your head - or you just do a session from scratch. We have the feeling that the producers have been given everything 'ready to play'. When it comes to modular systems it's a different case"
What are the creative limitations of playing live? Would you like to alternate between DJing and live to keep things fresh?
"That is exactly what we have done in the last two years. Before we went back to the studio as Modeselektor, we did an extended DJ tour to collect inspiration and to assess what we wanted to do next. In a live show, there are no limitations in that sense - you are free to express what you want and only the question of setup, weight, complexity and technical efforts."
Does a dance floor feel or appreciate the effort that goes into a 'live' set in your opinion?
"It depends on the artist, regardless if it’s a DJ or live music experience. The audience wants to feel part of an experience and in a way to be 'entertained'. You have additional show details such as visuals, lasers, smoke, lights [all] synchronised - then a DJ set experience can be felt almost like a live set experience. There are DJs whose crew is bigger than our live crew." 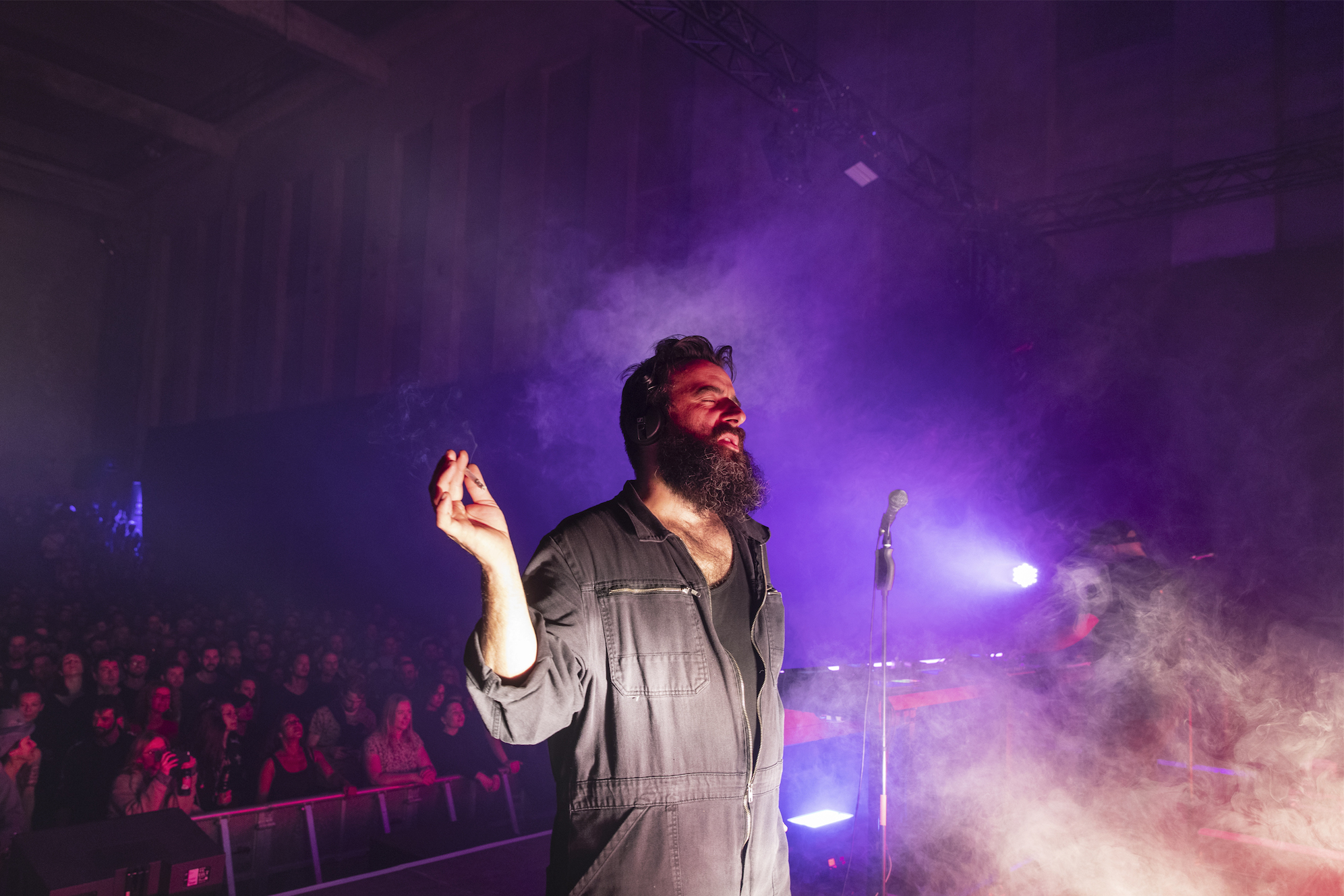 What would be your advice for a producer wanting to take their music live?
"There's not really a recommendation. I feel it is important to travel and stay inspired. Then decide if you want to express this through a live performance or DJ set."
As the lines blur between what 'live' is - running a drum alongside a DJ set, or a full-blown laptop-less hardware setup - what do you think is next for performance in the club?
"That's exactly where I feel the development will go: the hybrid of both things. Individualism has been the trend for several years – we do it too. That’s why we still take some live equipment with us – 909, synthesizer, FX. This is our hybrid. By the way, the 'haute cuisine' is still with vinyl … tschüss!"

The duo are one of the headlining acts to be performing at this year's Kappa FuturFestival (6-7th July, Torino - Italy) - you buy tickets here and get more info here.  Revisit Modeselektor's 'Who Else' album here.