Dallas electro: the unlikely story of the hard-hitting Texan underground

Dallas has long been a hub of razor sharp electro, but its history is lesser known than that of Chicago or Detroit. Here, Ben Murphy charts the evolution of the Texan city’s key artists, labels and venues, which have helped shape Dallas’ distinct and ever-evolving electro sound...

Dallas, Texas is an unlikely nerve centre of electro music. The city’s small but tight knit cabal of producers and DJs have been releasing essential underground tracks since the mid ’90s to rival anything made in Detroit or The Hague and, despite indifference from the dance mainstream, several of Dallas’s biggest electro names have acquired world renown.
“Though our scene may be small, we bring a crazy amount of love to it, maybe the same as a whole country of people,” says Cygnus (real name: Phillip Washington). “We all participate actively in it all year round.”

The highly respected E.R.P. makes chrome dipped space age electro, and is known for a prolific run of singles and albums on Frustrated Funk, Solar One and Semantica, in addition to his more techno geared Convextion project; Cygnus has been a regular feature on Sheffield’s CPU label, and has toured the U.S. with Autechre, spinning a fresh mixture of elastic electrofunk and dreamy sci-fi melodies; Blixaboy is heavily influenced by krautrock, folding celestial atmospheres into his electro beats; and Textasy finds the sweet spot where electro and breakbeat hardcore intersect, making tracks for labels such as Craigie Knowes and Dolphin Traxx.

“Electro is embedded into the cultural subconscious here,” says Textasy, aka Dustin Evans. “From going to roller rinks to listening to music in the summer, there’s been electro in the background. It’s one of those beats where you put it on and people are like, ‘Oh shit’, you’re programmed to dance that way.” 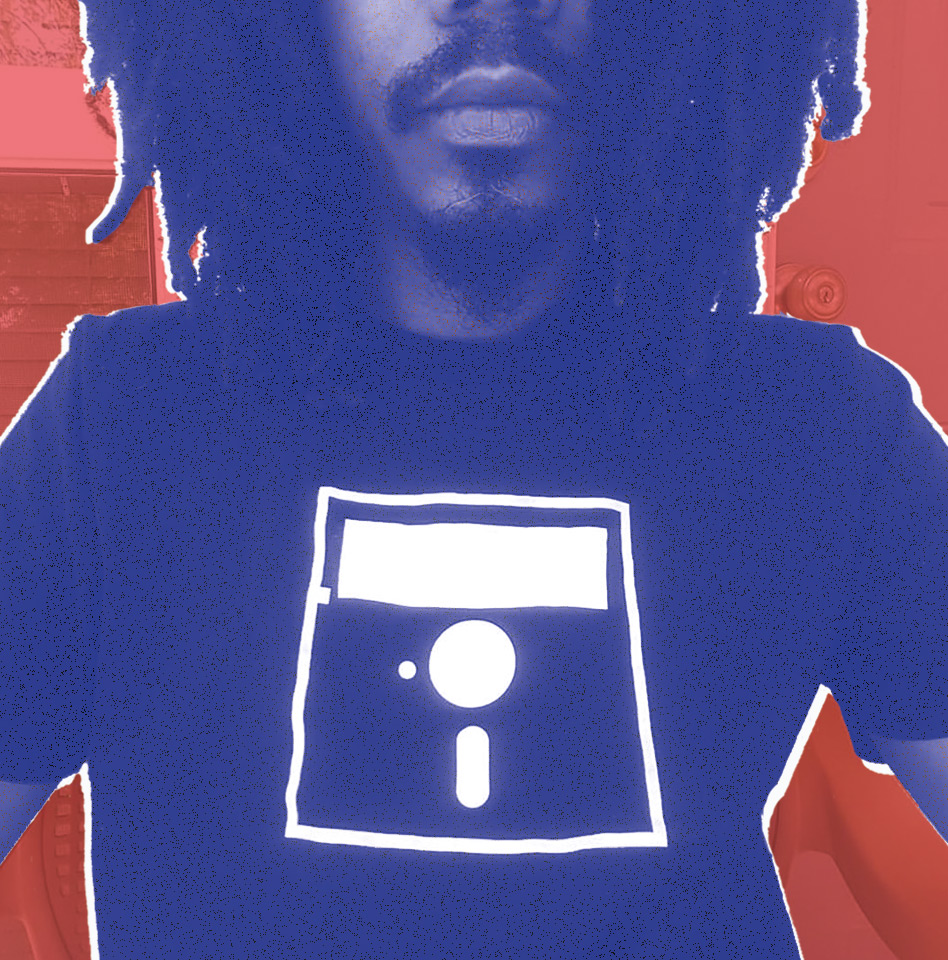 Electro is one expression of Dallas’s rich musical history, which encompasses hip-hop, punk rock, dance culture and more. In the mid to late ’80s, the city’s Starck Club, designed by famed French architect Philippe Starck, was a seminal venue that attracted superstars and politicians, and was famed as one of the first places where ecstasy was taken as a ‘dance drug’ (when it was still legal). House and techno were adopted early in Dallas, and breakbeat became especially popular: Nasa Project’s 1992 EP ‘High Friends In Places’ is a hidden classic of Dallas hardcore.

Instrumental to the history of dance music in Dallas, and especially electro, is Minto George: DJ, founder and co-owner (along with JT Stewart, aka $tinkworx) of Down Low Music. A label that since 1999 has put out many of the most important dance records by local acts such as Plastic Sleeves, DFD and Convextion/E.R.P., its 2001 various artists compilation ‘Satellite Cities’ is considered to be a seminal EP for the city’s scene.

“Dallas has a long history of dance music and not just electro specifically,” George says. “We had a great music scene that extended back to the pre-rave era, with Dallas nightclubs such as Starck Club, hip-hop forefathers D.O.C and Big Al, and Nemesis, as well as MC 900ft Jesus. We had great record shops here and amazing DJs, some of the best I’ve heard to this day.”

The urban sprawl incorporating Dallas and the adjacent city Fort Worth is known as the “metroplex”. According to Blixaboy (Wanz Dover), Juan Atkins named his famous Detroit techno label Metroplex after this conurbation, thanks to the popularity of one of his early Cybotron hits, ‘Clear’, in the roller rinks there. Minto George says another reason it was called Metroplex was that Bill Wisener, from local record emporium Bills Records & Tapes, would write cheques out to Detroit record distributors Submerge with the address “DFW Metroplex”, and the name stuck. “Dallas was apparently the biggest market for Cybotron in the early ’80s,” Blixaboy says. “Electro was just on black radio here in that decade and was very popular. The influence of that can be felt throughout the industrial, hip-hop and techno DJ vets of the city.” 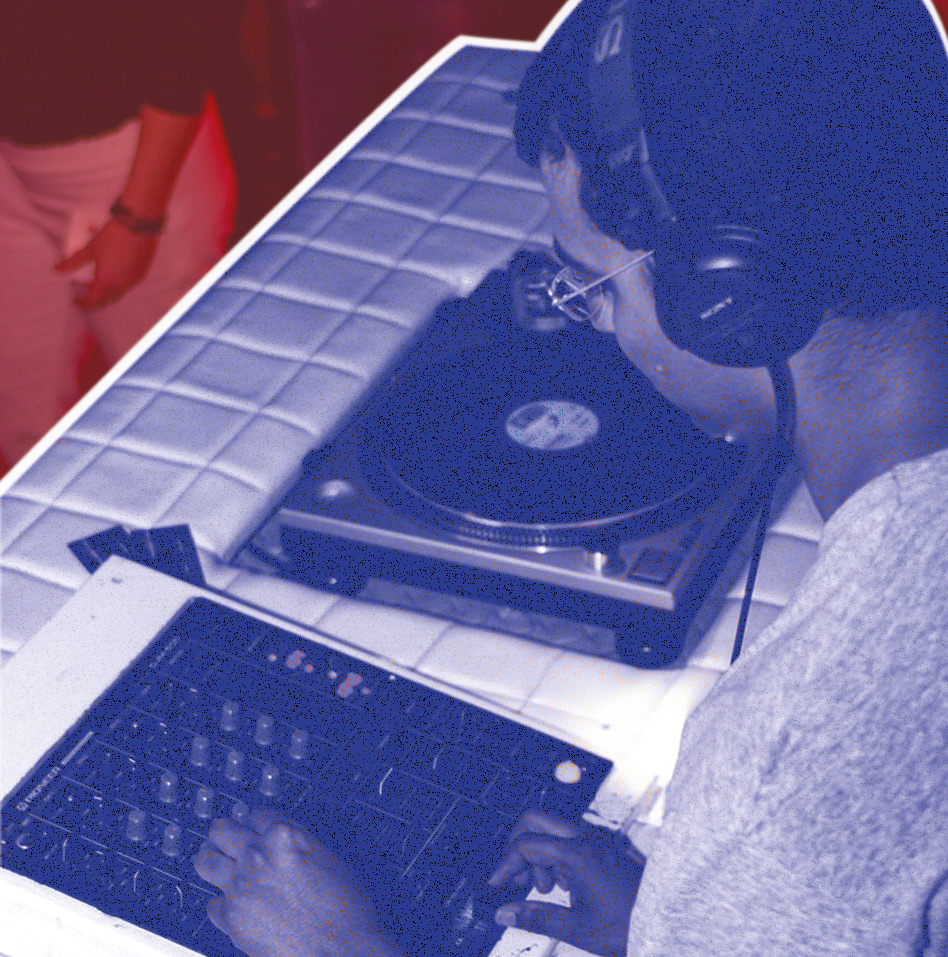 Blixaboy’s recent EP ‘Magmite’ on Spanish label Fanzine is loaded with shimmering, astral cuts such as ‘Zheng Tribe’. One of the Dallas scene’s most passionate advocates, Blixaboy has in the past been a club promoter for electro events in the city, and reckons that, though the scene is diminutive, it punches well above its weight. “It’s hard to really see it as a movement,” he admits. “That would infer that everyone is working together towards a common goal, when it’s more like electro is in the soil here, so it grew some plants. But we have an unusually high bar. Everyone is really good at their take, and it’s been amazing to see everyone grow over the years. I think the sheer amount of quality producers keeps everyone on their toes.”

Drawing from the earliest hip-hop incarnations of electro, in addition to the ever-present inspiration of Kraftwerk, another influence that looms large in the Dallas electro biome is that of Detroit. The sound of the Motor City permeates the music made by E.R.P., while its super-fast ghetto-tech subgenre (played by DJ Assault or DJ Godfather) is an inspiration to Textasy.
“There’s this huge appreciation of Detroit music here,” Textasy says. “I’ve heard it referred to as the Dallas-Detroit electro axis. Guys used to go on trips to Detroit in the ’90s, to DEMF/Movement festival, and be really inspired by it, and work for the whole year towards that.”

A hidden gem from 1995, D-Ram’s ‘S-Ram’ EP is among the first Dallas electro releases (good luck finding one on Discogs without shelling out a fortune). Made by Glen Tarrant and Reese Barnes, it was released on Dan Kurzius’s label Sidereal, who also ran a fanzine, Hard Sync, hugely influential on the local scene. (Kurzius incidentally started the successful company MailChimp after moving to Atlanta.)

Many of the artists agree that the greatest pioneer of electro in Dallas production wise is E.R.P. (Gerard Hanson). His 1996 release on Detroit’s Matrix Records is an early Dallas electro classic. “E.R.P. is the undisputed sensei,” Blixaboy says. “His knowledge of synthesis and the history of the music is humbling. I think it’s safe to say he has been an influence on everyone.” 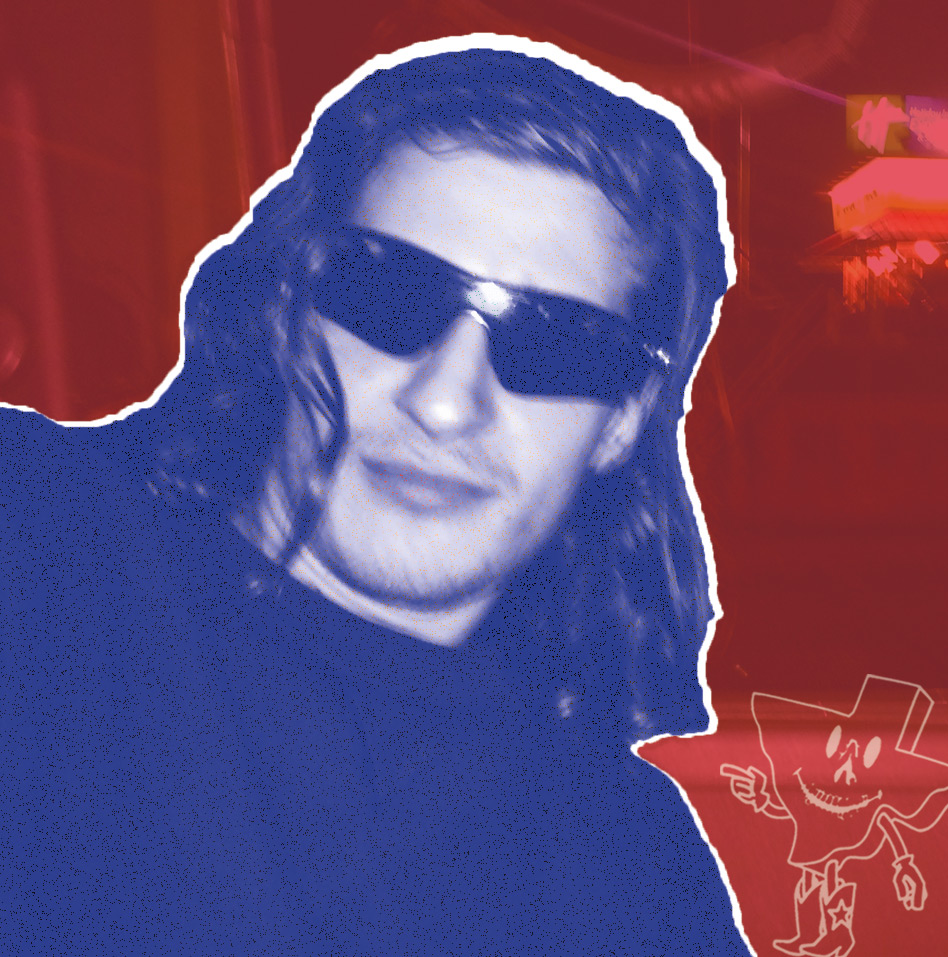 Another production outfit central to the sound is Plastic Sleeves (originally Michael Johnson and Jason Sparkman, latterly just Johnson solo), whose 2000 debut album ‘Messages From Machines’ is a captivating trip to the outer reaches of galactic and melodic electro, a true underrated classic, recently tipped by Helena Hauff in a Telekom Electronic Beats B-Sides video feature. “Mike Johnson is the perfect example of what it means to be a Dallas electro producer, he’s a 6ft 4 ex-military dude,” says Textasy. “He’s really polite. When I asked him to play [a party] a couple of years ago, he brought me copies of his record to give me as thanks for asking him to play. He’s extremely humble, and he puts on this mannequin mask to play live, obviously influenced by Dopplereffekt in his own way.”

DJ wise, Ricky Simpson, aka R9, has had the most impact upon the fortunes of electro in Dallas. “He’s one of the best electro DJs in the world,” says Cygnus. It was Simpson’s sets around the city that first exposed some of the current crop of electro talent in Dallas to the sound, and his 2001 cut ‘The Modern Mind’, with its stripped back bass bleeps and Speak ‘n’ Spell vox, is a Dallas electro classic. He’s currently working on new material, to be released soon.

“I think we made a little spark in the minds of a house dominated nightlife scene,” says Simpson. “Most of us from that era moved away and it took another 10 years for techno to get popular, and now some people are starting to notice electro here, but it is still a very underground specialty.
One of the most surprising Dallas electro pioneers, who now lives in Valencia, Spain, is American producer Eric Estornel, best known as Maceo Plex. In the mid to late ’90s, he was making breakbeat and electro hybrids, some of which are due to be reissued.

“His heart is in electro and he started DJing and producing breaks and electro as Eric Entity, Tali Wackas and later, Mariel Ito,” says Minto George. “I have a feeling you'll hear more of his old sound in his future productions.” 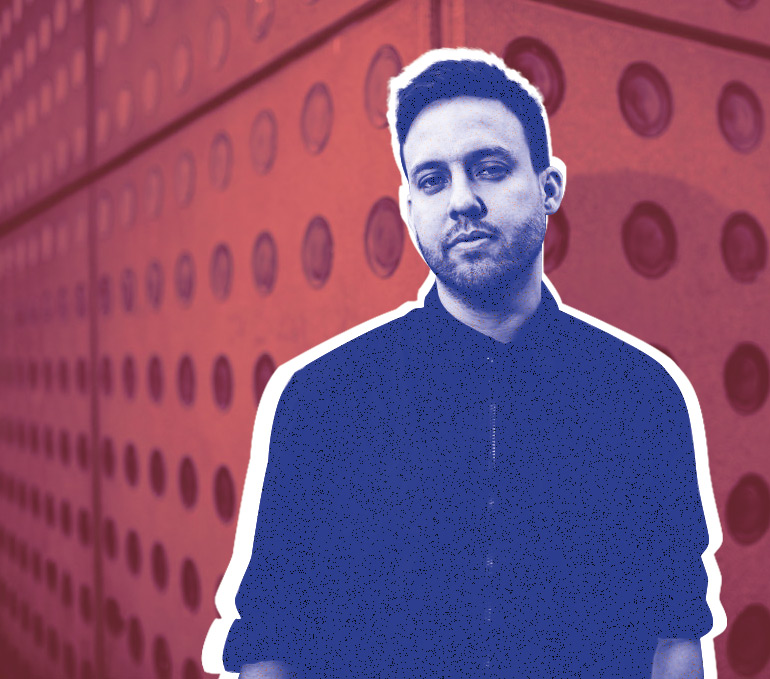 Something Dallas electro producers and DJs have lacked is a club nucleus. While house and techno are represented by spots like It’ll Do Club, electro events in the city tend to be low-key and in backrooms and bars, such as the Bryan Street Tavern. Textasy has put on events outside the city, and Blixaboy used to run a night called Stereo On Strike, but it’s still mostly on a micro scale. Nevertheless, the few who attend these events are hugely into the music. “There’s a scene here but it manifests itself differently from every other musical scene,” says Cygnus. “It’s really not that big at all, but it’s very big in our hearts.”

The music of Cygnus has an airy, distinctively sci-fi atmosphere. On his 2016 album ‘Cosmos’ (through Fundamental Records), it’s all shiny surfaces, warm synth bass and twinkling firmaments of electronic melody. Its sense of spaciousness, Cygnus feels, is a quality present in a lot of the electro produced in the city.
“I guess you could say that Gerard [E.R.P.]’s style of serene and sleek, spacey electro finds its influence here,” he says. “You can hear that in a lot of electro artists from Dallas: sounds that inspire images of wide spaces and a kind of emptiness show up a lot.” 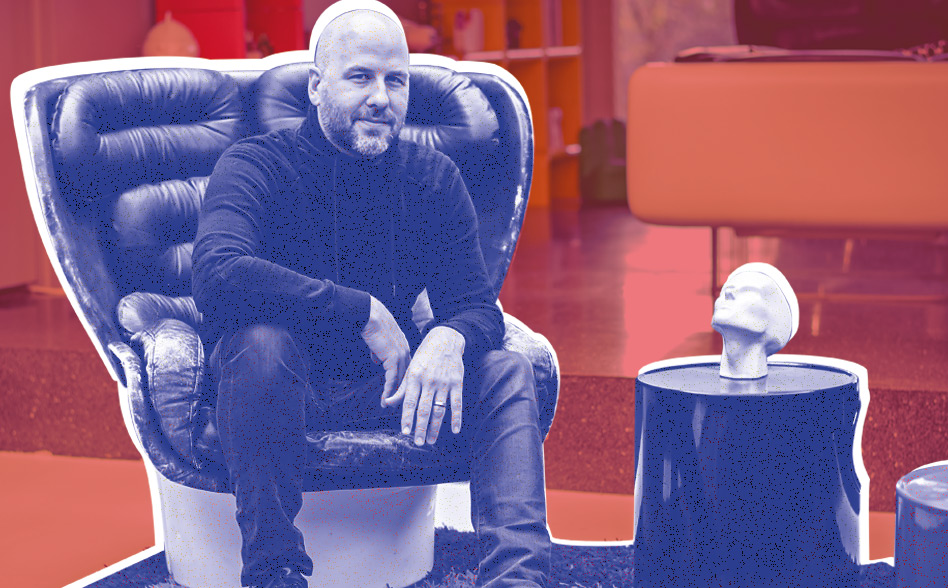 Whether the genre remains trendy or not, Dallas’s most dedicated will continue to keep the fire burning for the true electro fans. “Electro is kind of the flavour of the month right now,” says Minto George. “But it will still be here when this latest wave fizzles. Love and support from fellow colleagues keeps the music in the forefront.”

Want more long reads? Read our feature on the unstoppable influence of EBM or the changing definition of EDM here.