While most industry-standard mixers go for professional prices, it is possible to land an adequate home mixer on a strict budget. We round up your options…

Professional DJ mixers rarely come in at a wallet-friendly price – and for good reason. Sound, effects and phono amp quality are all at a premium, with a build quality willing to withstand the nightly onslaught of DJs slamming the faders, subwoofers shaking the stage and guestlist crew throwing their drinks around the booth. Not to mention enough ins and outs to satisfy even the most ambitious of tech riders.

For most beginner DJs or anyone looking for a home setup, the hefty cost of the industry standard mixer is too much to bear, so we’ve decided to round up five mixers perfect the your home setup on a budget. As always, make sure you do your research before choosing the mixer for you – everyone has their own preferences when it comes to their setup, but this guide will help you get started. 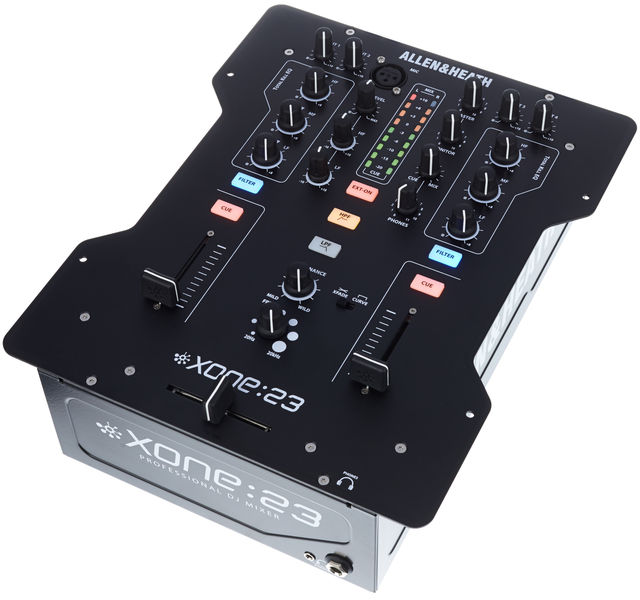 Often when buying budget products, it’s best to stick to the cheapest versions of an established brand’s product line, rather than looking at budget brands exclusively. Not only will you sometimes inherit features from the flagship products – in this case, Allen & Heath’s acclaimed analogue filter – the brands tend to use the same basic parts across their product line, meaning your mixer is more likely to last longer and sound better.

A&H’s Xone:23 is a simple two-channel affair with one shared analogue filter that can operate in high-pass or low-pass mode. The channels can operate in phono or line mode, though with independent volume controls over each of the four inputs, you can theoretically run four audio signals through the mixer at the same time. Elsewhere there’s an XLR mic input with two band EQ and a dedicated booth output and volume control, a rarity on budget mixers.

To top it off there’s a record output, FX send and return (there’s none built in) and a record output too. With main outs via XLR, it’s a pro mixer with a budget price tag. If you only need two ins and don’t mind about FX, it’s a very strong option. 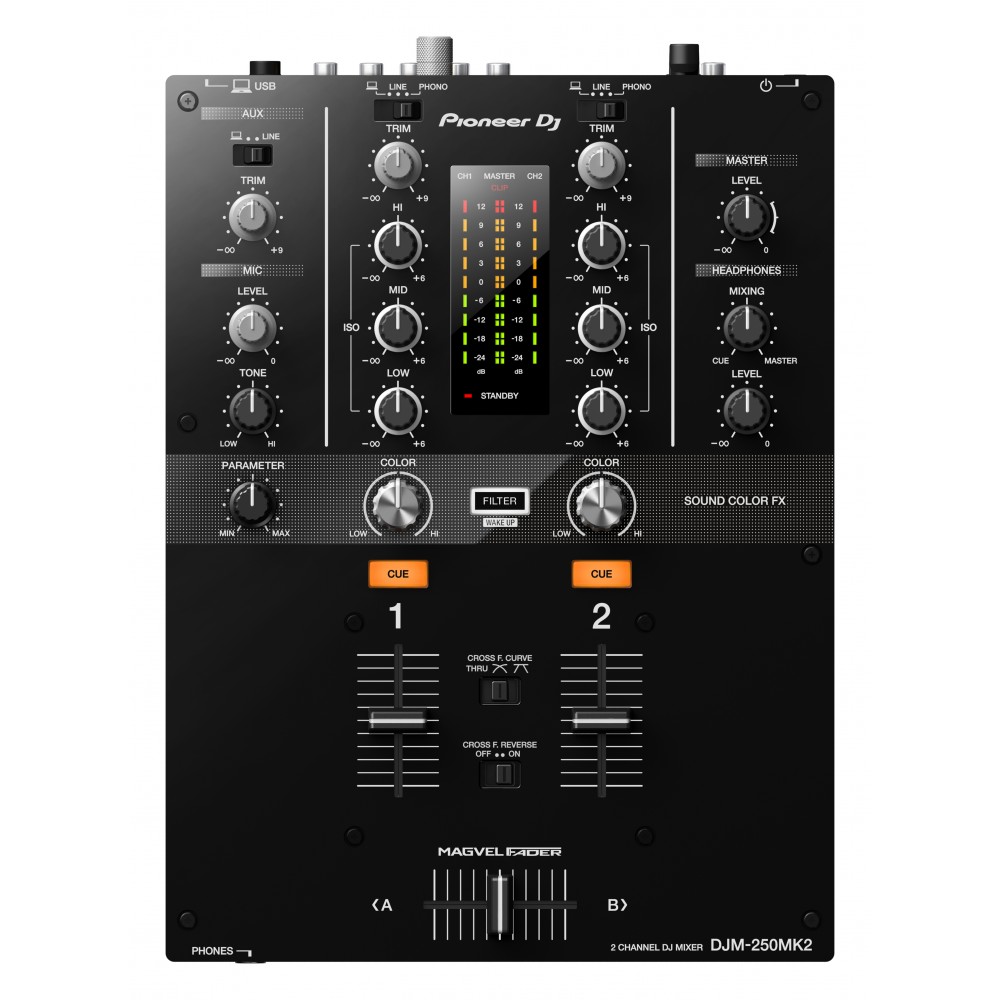 Pioneer DJ’s DJM range is one of the most ubiquitous mixers in clubs around the world. Famous for its high-quality range of effects, multi-functional ins and outs and per-channel Sound Color FX, the DJM-950nxs2 is the flagship in Pioneer DJ’s range while the DJM-250mkII is the entry-level equivalent. Still, it packs a punch for its price, with two channels both with phono and line options, Magvel faders taken from the much pricier models, individual multi-mode filters on each channel and even a built-in USB soundcard.

Round back, there’s the aforementioned RCA inputs for line or phono, as well as a separate Aux in, controlled with an independent volume knob – perfect for leaving a smart phone plugged in for background listening.

While there’s no dedicated booth output, there are two master outs – one on RCA and one on XLR – so you could dedicate one to booth duties if your monitor had its own volume knob. The USB port is really what makes the DJM-250mkII great value for money. It can used as a soundcard for any compatible DJ software and the inputs also support dvs signals so you can control rekrdbox dj using timecode vinyl or CDs, with no extra hardware.

There’s even a rekordbox dj license in the box to get you started. Considering a decent two-channel soundcard will set you back around £75-100 by itself, the DJM-250mkII suddenly looks like a bargain mixer. 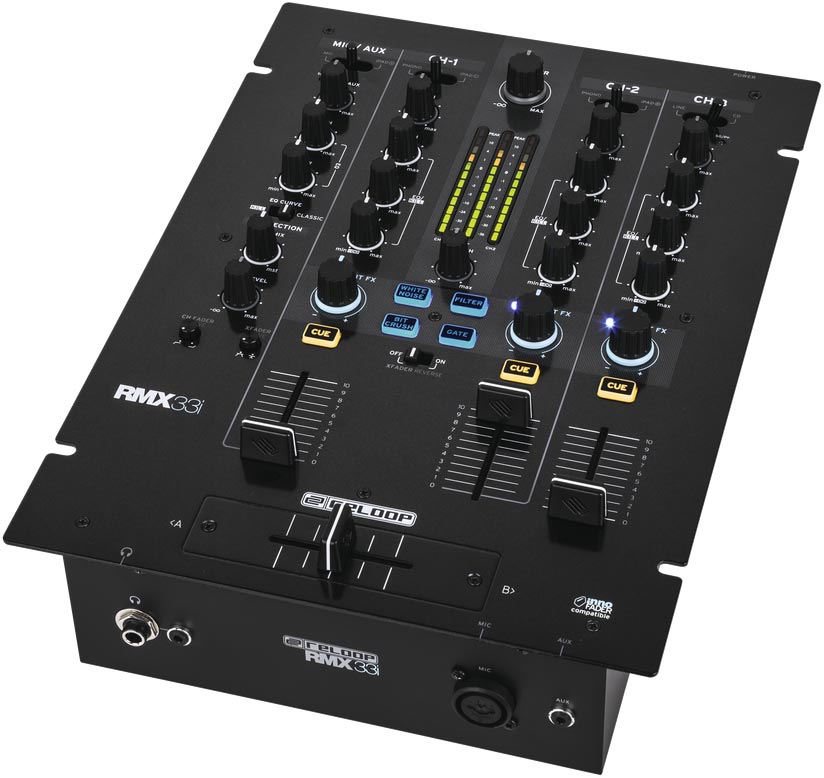 Reloop’s mixer range has always pushed the boundaries, with innovative digital functionality often defining their DJ offerings. Their entry-level RMX-33i does just that, featuring three channels, two of which feature phono amps, four effects with a total of ten inputs and seven outputs.

For any iPad or tablet DJs, the RMX-33i features 3.5mm inputs on two channels, supporting any app that offers ‘split-cue’ functionality. While channel three doesn’t offer any LED feedback or a phono input, it’s still a rare opportunity to have control over three individual faders at this price point and the switchable EQ means you can adjust the curve from classic to ‘kill’, completely removing the band from the signal, similar to Pioneer’s ‘Iso’ function. Throw in a dedicated booth out and control and the RMX-33i is undoubtedly one of the most comprehensive mixers at this price point. If you’re looking for more than just a straight-up two-input mixer, it needs to be on your list. 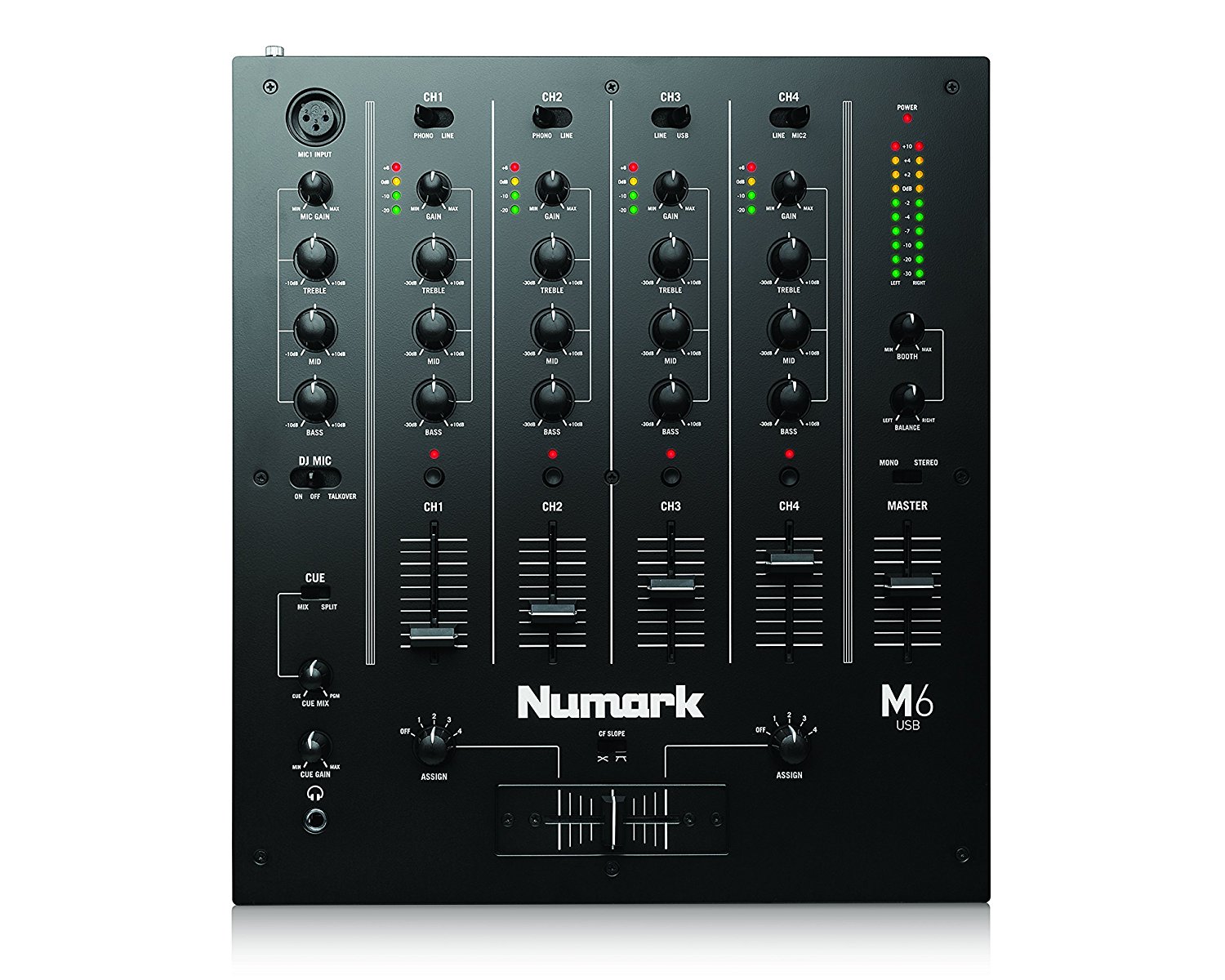 Numark’s name has long been associated with high-quality DJ products, usually catering for scratching and turntablists. While they’ve offered a wide range of mixers over the year, their current M range are definitely some of the most affordable units on the market. The M6 USB is their most full-featured mixer that comes in under our price point and it’s almost hard to believe the features it has for the outlay.

Featuring four channels, two of which have phono amps, a USB soundcard for recording the master channel or sending audio back into the mixer via channel 3, two mic inputs, dedicated booth outs, record output, three-band EQ per channel and XLR master outputs. All of it comes in at £169, making it the cheapest mixer on our list.

Despite any potential sound or build qualities you might experience at this price, it’s unlikely Numark would put their name on any product that didn’t match their high standards – the only drawback we can see is it doesn’t have any upgrade path to a more industry standard mixer. Still, a unit that deserves to be on your list.

Make sure you keep an eye on DJ Mag Tech and if your budget can stretch, Rane's new battle mixer might be for you.