Norman Cook AKA Fatboy Slim is, quite simply, a British institution. A dizzyingly eclectic individual, he takes his inspiration from a number of different sounds and vibes, with everything from Motown classics to obscure Northern Soul tracks playing a pivotal role in his musical DNA. Since first emerging in 1983 as part of The Housemartins project, Norm has embarked on a rollercoaster ride of sound and vision — taking his loyal fans along with him. A top musician and a top bloke, Fatboy Slim is one of the most brilliant DJ/producers in the game.

Here, we take a look back at some of his most iconic moments…

The Housemartins (1983–1988)
Long before he adopted his Fatboy Slim alias, plain ol’ Norman Cook was the bass player for the self-proclaimed ‘fourth best band in Hull’, The Housemartins. Lending bass and vocals to the band’s two albums, ‘London 0 Hull 4’ and ‘People Who Grinned Themselves To Death’, Norm also starred in the band’s John Peel sessions, released as part of their ‘Live at the BBC’ album.

The band’s debut single was ‘Dub Be Good To Me’, which merged The SOS Band’s ‘Just Be Good To Me’ with the bassline from The Clash’s ‘Guns Of Brixton’. Displaying his remix skills early on, it was a sign of things to come. The band released two albums, ‘Let Them Eat Bingo’ and ‘Excursions On A Version’, before calling it a day in 1992.

Pizzaman (1993–1997)
Formed alongside John Reid in 1993, the Pizzaman project consisted of only one album, ‘Pizzamania’, which would spawn three Top 40 hits. Featuring a sound far closer to that of Fatboy Slim’s (see the likes of ‘Happiness’ for proof), the band embodied the eclecticism of Beats International and the dancefloor focus of Fatboy Slim's later work.

‘Brimful of Asha (remix)’ (1998)
What can we say about one Fatboy Slim's greatest remixes? Much like Todd Terry’s reinterpreation of Everything But The Girl’s ‘Missing’, it’s a remix that transcends original track. It’s another wonderful example of Fatboy’s ability to produce a fun slice of crossover dance music. 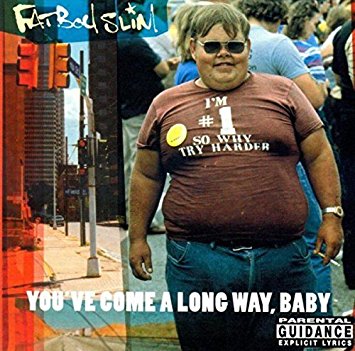 ‘You’ve Come a Long Way Baby’ (1998)
The second official Fatboy Slim album after ‘Better Living Through Chemistry’, ‘You’ve Come a Long Way Baby’ symbolised the moment Fatboy Slim realised his full potential. A classic of the big beat genre, the album featured four singles that enjoyed both chart success and critical acclaim. From the disco stylings of ‘The Rockafeller Skank’ to the wonderfully odd ‘Praise You’, the album's music videos are also an iconic part of Fatboy Slim's story.

Live on Brighton Beach (2001)
On 7th July 2001, Fatboy Slim played a monumental gig on Brighton Pier, the likes of which the town is will (probably) never see again. A mixed bag of music and chaos, the free concert attracted more than four times the number of expected attendees, swelling the crowd size to approximately 250,000. Although the event was unfortunately marred by tragedy (one festival-goers died of a heart attack), it was also an indication of just how popular Fatboy had become.

Olympics Closing Ceremony (2012)
Emerging from a giant, glowing octopus, Fatboy Slim played two of his biggest tracks at the London Olympics Closing Ceremony in 2012 — including ‘Right Here, Right Now’ and ‘The Rockafeller Skank’ — with a huge crew of dancers by his side. "It was great to be picked to represent Team GB in Djing and the club culture era’" said Norm at the time.

Eat, Sleep, Rave, Repeat (2013)
Produced in tandem with Riva Starr and featuring vocals from Beardyman, 'Eat Sleep Rave Repeat' reached No.3 in the UK charts in the summer of 2013. Hilariously capturing the chaos of constant partying, the track was boosted by a remix by Calvin Harris and introduced Fatboy Slim to a new generation of club-goers. His last single, 2017's 'Where You Iz', wasn't bad either... 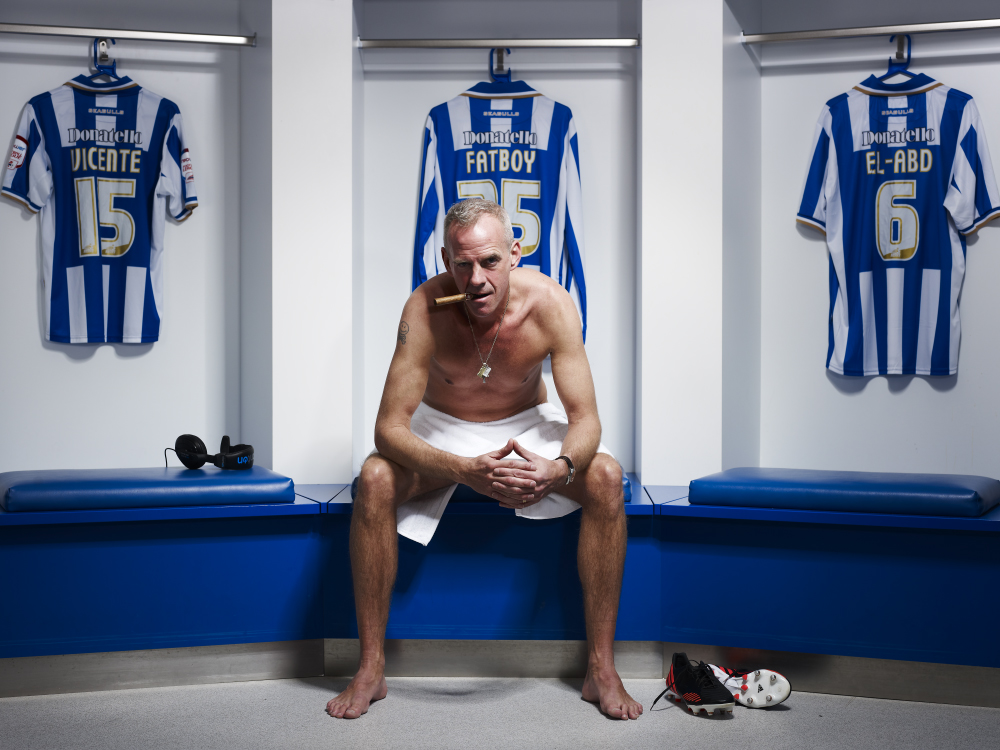 Brighton & Hove Albion
To prevent the football club's top scorer Bobby Zamora from being sold, Fatboy Slim purchased a 12% share in Brighton & Hove Albion in 2002. His favourite football team since moving to Brighton during college, Fatboy has mostly kept his distance from the day-to-day workings of the club — although he did play a surprise gig to celebrate the team being promoted to the Premier League last year. 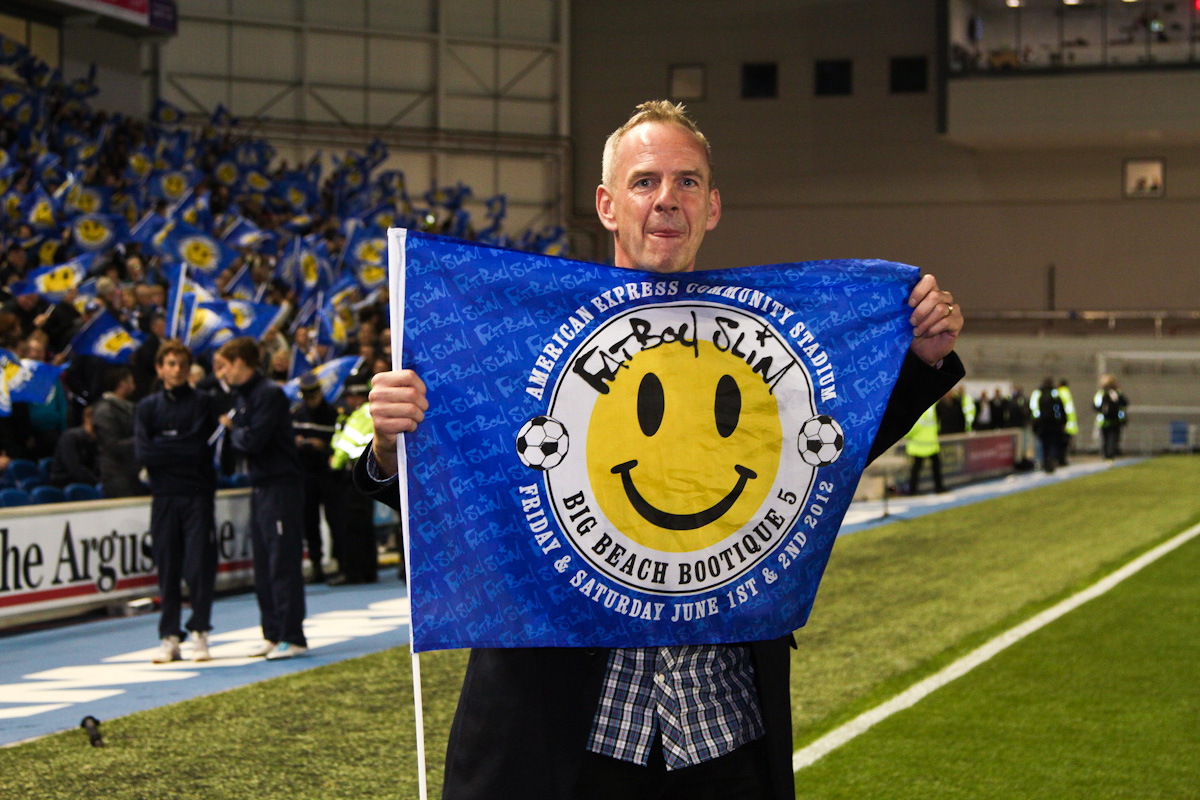 Brighton Walk of Fame
Though originally from Reigate, Brighton has been Norman Cook’s home for many years. Reguarly spotted around the town, he has contributed to the city through supporting charitable causes and contributing financially to various projects. This community spirit, along with his considerable fame, culminated in him being added to the Brighton Walk of Fame, right next to none other than Winston Churchill.

Read our 10 moments that defined features with Above & Beyond, Stephan Bodzin and Underworld.