10 massive tracks from one of the world’s greatest clubbing experiences, Despacio | DJMagAdmin.com Skip to main content

10 massive tracks from one of the world’s greatest clubbing experiences, Despacio

10 massive tracks from one of the world’s greatest clubbing experiences, Despacio

“Despacio is happiness” reads a huge sign that looms overhead as you walk into the travelling audiophile soundsystem at the inaugural All Points East (APE) festival in Victoria Park, London.

The brainchild of LCD Soundsystem’s James Murphy and Dewaele brothers Stephen and David – better known as 2ManyDJs – inside the trio roll out a chugging vinyl-only showcase of disco, Italo, new wave, classic rock, acid house, electroclash and myriad more sounds for three afternoons at APE between 2pm and 8pm.

Starting at Manchester International Festival in 2013, Despacio, meaning ‘slowly’ in Spanish, was originally intended to be an open-air party in Ibiza to celebrate their love of the Balearic style made famous by DJs like Alfredo during the ‘80s and eclectic selectors like Daniele Baldelli in Italy.

In order to execute their intention of delivering low-BPM tracks no longer associated with the dancefloor at peak time, the trio built the bespoke 50,000 watt seven-stack system with audio-pioneers McIntosh, and have now toured it across Europe and America. 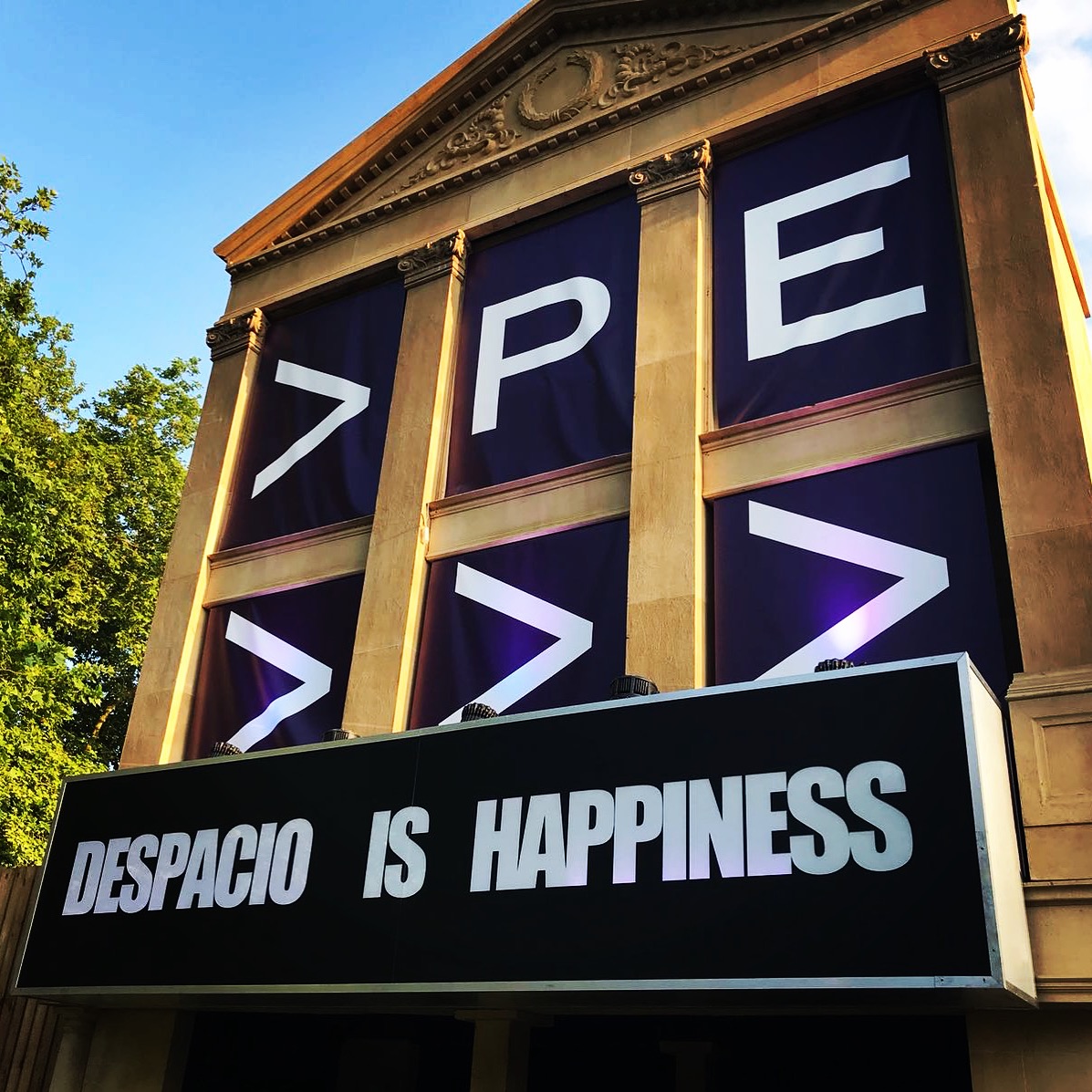 Having already hit Glastonbury – where the rig famously had more power than the festival’s famous Pyramid Stage – Sónar, Coachella, London’s Roundhouse and a recent three-date New York residency, Despacio is a major coup for the first APE festival, adding an extra dimension to a strong line-up that pairs indie royalty in Bjork, LCD Soundsystem, Yeah Yeah Yeahs and The xx with a strong DJ roster that includes Hunee, The Black Madonna and Omar-S.

Stripping away the bells and whistles of the modern-day clubbing experience – recently lamented by DVS1 in his recent DJ Mag UK feature – Despacio hides the DJs away in the corner of the space and places the focus purely on the music.

The main feature of the room, which is mostly submerged in complete darkness underneath a single giant disco ball, is the looming McIntosh stacks. The result is that the crowd between them are dancing in a way often missing in clubs now – heads down, lost in music and facing each other rather than the DJ booth – a victory in a scene which often finds its core values being forgotten.

On the rare occasions the lights are up, they are mainly used to illuminate the giant disco ball, and reveal an abundance of smiles across the dancefloor as the crowd whoops and applauds tracks that build for an eternity, refusing to peak in the way many main stage soundsystems have become accustomed.

Only ever running at around 30% of its potential, the system punches out percussion and kicks of familiar tracks in ways you’ve never picked up on before. Audiophile bars are opening aplenty recently, with Brilliant Corners taking their touring project to Farr and Houghton last year and the world's first permanent 3D soundsystem opening this summer, but their bespoke McIntosh system is a triumph, tuned for the specific sound the trio play.

With a pretty much constant queue to get into Despacio throughout the weekend, you might expect organisers to pack the space out, but the wait is to keep the dancefloor busy enough to go off, without being so rammed it ruins the experience.

Much in the same way as it’s kindred spirit in present-day clubbing, block9, Despacio is a hot and sweaty, back-to-basics experience that recalls vintage disco era clubs. But instead of coming off pastiche, Despacio continues to carve its own part of history as one of modern day’s greatest clubbing experiences. “Despacio is happiness”, they claim. Judging on the smiles on faces across the dancefloor, they’re not wrong.

Along with a number of specially pressed, money-cannot-buy, Despacio edits – including a glorious, stripped-out dubplate of Sylvester’s ‘You Make Me Feel (Mighty Real)’ that almost entirely ignores the original’s vocal – below are ten massive tracks dropped on the Despacio soundsystem at the inaugural All Points East festival.

3. Talking Heads ‘This Must Be The Place (Naive Melody)’

4. A Number of Names ‘Sharevari’